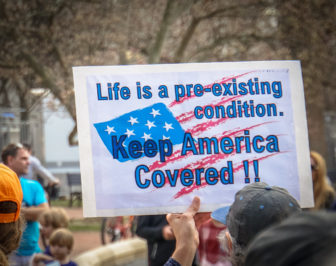 A rally in February in favor of the Affordable Care Act.

Washington – The Trump administration on Wednesday issued final rules that would allow states like Connecticut to allow the sale of cheaper, skimpier health care plans that were originally intended for short-term use but would now be available for 364 days, or nearly 12 months, at a time.

It’s up to state officials to allow the sale of these short-term plans, which do not have to cover pre-existing conditions or provide the comprehensive coverage the Affordable Care Act requires.

Critics of the administration’s action say they will attract younger, healthier consumers and force insurers to raise premiums on everyone else.

It’s not clear Connecticut consumers will be able to purchase the plans.

The Connecticut Insurance Department said Thursday it is reviewing the final rule, issued by the Department of Health and Human Services to comply with an executive order issued by President Donald Trump in October to promote “a health care system that provides high-quality care at affordable price for the American people.”

States can restrict the  sale of these short-term plans, or require that they contain certain benefits.

The final rule will take effect in 60 days, just before the new open enrollment period for the Affordable Care Act.

Under the new rule, short-term plans could provide coverage for up to 364 days, and insurers would be allowed, but not required, to extend policies for up to 36 months. That means a consumer could be covered under a “short-term” plan for up to three years. Short-term plans were originally intended for people who were between jobs or needed temporary coverage for other reasons.

It’s estimated that premiums for these pared-down plans will cost about half of what they cost now on the individual marketplace.

“Under the Affordable Care Act, Americans have seen insurance premiums rise and choices dwindle,” HHS Secretary Alex Azar said in a statement. “President Trump is bringing more affordable insurance options back to the market, including through allowing the renewal of short-term plans. These plans aren’t for everyone, but they can provide a much more affordable option for millions of the forgotten men and women left out by the current system.”

Connecticut-based insurers had lobbied the Trump administration, mostly unsuccessfully, to adopt certain consumer protections as it crafted the final regulations for short-term plans this year.

In public comments on the proposed rules, Bloomfield-based Cigna urged the administration to limit the duration of the policies to six months at a time.

Cigna also said the ACA “established numerous protections and standards for consumers in the individual market to support them in accessing affordable, quality health insurance regardless of where they live.” But the insurance company warned that short-term policies “would be unlikely to include many of those protections, such as the preexisting condition exclusion prohibition, coverage of essential health benefits without annual or lifetime dollar limits, preventive care, maternity and prescription drug coverage, rating restrictions, and guaranteed renewability.”

“Cigna is concerned about what befalls consumers whose needs cannot be satisfied by (a short-term policy) and what the larger ramifications are to the health care system as a whole,” the Bloomfield-based insurer said in its public comments.

Aetna, headquartered in Hartford, was more supportive of the administration’s plan.

“We believe that given the current state of the ACA-compliant market, many Americans need more affordable options for individually purchased coverage,” the company said in its public comments. “Short-term Limited Duration Insurance can be a valuable option for many consumers.”

Aetna, however, urged the administration to impose certain consumer protections on the sale of the  short-term plans, including allowing those that end in the middle of the calendar year to continue until the end of the year to allow people who have developed serious medical conditions to have coverage until the next ACA open-enrollment period.

Aetna also asked the administration to limit the “look back” period under which a person could be denied coverage for a pre-existing condition to 12 months.

“Consumers should be assured that insurers will not deny claims for current medical care based solely on medical treatment received years earlier,” Aetna said.

Democrats called the expended short-term plans “junk insurance,” and said the move was another attempt by the Trump administration to “sabotage” the Affordable Care Act.

“These predatory plans offer few benefits and guarantee even fewer basic protections—taking us back to the dark days when consumers paid too much for the illusion of critical health coverage and a false peace of mind,” he said.

Blumenthal also said plans that fail to cover certain benefits “should be barred from the marketplace. Plain and simple.”

HHS received more than 150 letters from Connecticut residents who wanted to weigh in on the new regulations. Most opposed the expansion of short-term plans, especially if they barred coverage for people with pre-existing conditions.

Typical of the comments from Connecticut was one that said the new rule would make it easier for insurers to sell plans that don’t cover critical health care services, like mental health coverage, maternity care, or prescription drugs and “would turn back the clock to the days when insurers could discriminate against people with pre-existing conditions.”

“It could cause thousands of families to lose everything they’ve worked so hard for when they are struck by illness or injury and their health plan does not protect them from financial ruin,” the letter to HHS said.