GOP primary rivals for U.S. Senate, Corey, Rapini, blast Murphy, not each other 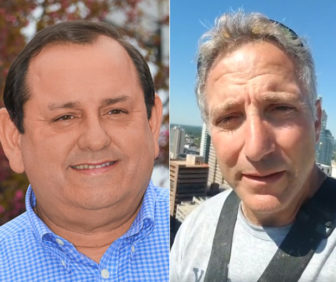 Connecticut’s U.S. Senate race is a sleeper, compared to the high-profile contest for governor or some of the other hot races in the state this year.

But that race gives voters a clear choice between a progressive Democrat and two Republicans who support President Trump’s policies and are united in their belief that Sen. Chris Murphy is taking the state in the wrong direction.

While they are competing in their party’s Aug. 14 primary, the two Republicans seeking to unseat Murphy are also united in their campaign tactics.

In a political year that has spawned bitter primary intraparty feuds in Connecticut, Matthew Corey, the party’s endorsed candidate, and Dominic Rapini have refrained from battering each other and are swinging at Murphy, instead.

Corey, 54, a Navy veteran who owns a popular bar in Hartford and a commercial window-washing company, as a Republican twice lost races against Rep. John Larson, D-1st District. In  challenging Murphy —who has no primary opponent — Corey has set his political sights higher, but has been unable to attract much financial support for his campaign.

According to the latest filing with the Federal Election Commission, Corey raised about $28,000, compared to Murphy who has attracted more than $13 million in his bid for a second term in the Senate. The Republican challenger has appealed for funding and explained his positions in a Facebook video he made while high atop a building in downtown Hartford.

The other Republican seeking to unseat Murphy is Dominic Rapini, 57, who lives in Branford and is a longtime account manager for Apple Inc.

Rapini, who has never run for political office before, has had better luck funding his campaign than Corey, raising about $173,000 – about $50,000 of that a personal loan to his campaign.

Despite the challenges Rapini faces in taking on an incumbent senator with plenty of campaign cash, he’s enthusiastic and optimistic about his campaign. He has spent more than $55,000 on consultants to teach him the political ropes and hone his message.

“I spent much of my spare time learning how to be a candidate,” said Rapini, who is still working for Apple full-time.

He said he’s tapped “a couple of hundred” volunteers who are going door to door, urging Republicans to choose him over Corey in the primary.

He has also launched a video on social media last weekend that does not mention his primary opponent, but instead focuses on his positions on gun control, immigration, and the need to lift burdensome regulations from small businesses.

“Chris Murphy has torn apart our state and set it on fire,” Rapini says in his video.

Rapini has begun to advertise on the radio this week as well. His radio spots also fail to mention his primary opponent.

Corey, who failed to respond to several requests for an interview, has also focused his energies on defeating Murphy, not Rapini.

In a recent interview with Reclaim Connecticut, Corey said he’d support Rapini if he wins on Aug. 14.

“This election’s bigger than each and every one of us,” Corey said. “I’d be proud to stand behind Dominic Rapini [if he wins].”

Meanwhile, Rapini said “everything I do is with complete respect toward my Republican opponent.”

He said he follows Ronald Reagan’s “Eleventh Commandment,” which is “Thou shalt not speak ill of any fellow Republican,” and that keeping his campaign against Corey on a positive note “is the right thing to do.”

University of Connecticut political science professor Ronald Schurin said the GOP primary rivals may be playing nice because they are looking toward their future.

“They probably don’t seriously believe they can defeat Chris Murphy,” Schurin said. “A primary motivation for each of them is to establish credibility as a future leader in the Republican Party. If that’s the case, they would not want to burn any bridges.”

Murphy, for his part, has largely ignored both candidates.

Corey and Rapini have similar stands on the issues.

“His style should not be replicated unless you know what you are doing,” Rapini said. “It’s mostly  a question of style, but I love the results. [Trump] gets things done, although it’s a little messy along the way.”

While Rapini supports Trump’s insistence on building a wall along the U.S -Mexico border and curbing family-based immigration, he said that after all criminal aliens are deported, there should be a process for hard-working, law abiding citizens to be able to stay in the United States. He calls this plan “the Walmart solution.”

Rapini said retail chains like Walmart should have offices staffed by federal employees, called “Freedom Centers” that would allow qualified immigrants to gain legal status. They would have to speak English, have no criminal record and pay a fee, but would not vote or have a path to citizenship.

Rapini is also campaigning on a promise to create a “pipeline of talent” from vocational schools to manufacturers to address what he calls a “skills gap” that leaves the nation short of skilled laborers, including metal workers, plumbers, electricians and workers with digital abilities.

Corey’s campaign issues include shoring up Social Security by raising the retirement age and the contribution cap at which income is no longer subject to Social Security taxes.

He also promotes giving parents who home school their children tax credit, abolishing the federal Department of Education and giving states and local governments block grants to help them fund education instead.

But if there is a competition between the two Republicans running for Murphy’s seat, it centers on who is more skilled in bashing the Democratic incumbent, who represented Newtown as a congressman and is on the front lines of the push for tougher federal gun laws.

For instance, after the massacre by a gunman in Las Vegas last year, Corey accused Murphy of politicizing that tragedy, and other mass shootings.

“Murphy bears responsibility for what happened in Las Vegas and the shooting of (House Majority Leader) Steve Scalise, and has blood on his hands, due to his constantly divisive rhetoric in Washington, and his inability to find or forge a solution to the escalation in violence,” Corey said in a statement.