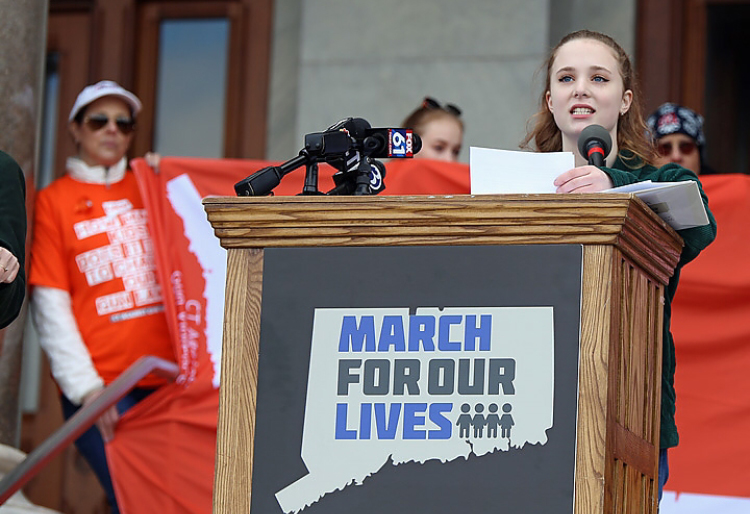 Isabella Segall of Wilton speaking at the March for Our Lives rally in Hartford earlier this year.

When a busload of Parkland, Fla., high school gun-control activists arrives in Newtown on Sunday, they will be completing an emotional tour of 50 cities, some the sites of  the nation’s grisliest mass shootings, in an effort to create political change.

The stop in Newtown, to honor the 20 first graders and six educators slain by gunfire at Sandy Hook Elementary School in December of 2012, is the end of the Parkland survivors’ two-month national tour.

But it will not be the end of a political season in which the activism of survivors of Marjorie Stoneman Douglas High School has prompted Democrats to, for the first time in decades, campaign on gun control and has made some vulnerable Republicans anxious about their “A” rating from the National Rifle Association.

The Parkland students phenomenal use of social media, and their marathon bus trip and rallies, has also changed the climate in Congress — not so much to prompt lawmakers to tighten federal gun laws, but enough to derail the NRA’s push for a national right to carry law and a rollback of regulations on silencers.

The 2007 mass shooting at Virginia Tech, which left 32 dead, is the nation’s worst school shooting. Second is Newtown. Parkland was the scene of the third deadliest, where on Valentine’s Day this year Nikolas Cruz, a 19-year old former Stoneman-Douglas student, killed 17 people.

Before rolling into Newtown, the students have held “March for Our Lives” rallies in towns with recent mass massacres, including Las Vegas and Charleston, S.C., and dozens of other cities and towns bloodied and terrified with gun violence.

NRA headquarters outside of Washington D.C. was also a target. At a rally outside that headquarters on Sunday, a crowd sang “Happy Birthday” to Parkland victim Joaquin Oliver, who would have turned 18 on that day.

The Parkland students’ Newtown event at the Fairfield Hills Campus on  Primrose Street, is aimed at honoring the young victims of gun violence in that town and promoting stricter gun laws. Organizers want universal, comprehensive background checks for all gun sales, and a ban on high-capacity magazines and assault weapons.

But the students also want  to promote voter registration among young people, who often  have been notoriously apathetic when it comes to Election Day.

“It’s geared to getting students and younger people to vote for people who will promote gun laws so people don’t feel that their lives are at risk every time they enter a school, or a church, or their homes,” said Jeremy Stein of CT Against Gun Violence.

Stein’s organization is one of several groups participating in Sunday’s event, which is hosted by Sandy Hook Promise, a group founded by parents of slain Sandy Hook Elementary School children to promote safer schools and mental health.

Isabella Segall, founder of CT Teens Against Gun Violence, will be among the local youth who will speak at the event. She said she was distraught after the Parkland shooting and that her father prodded her toward activism.

“I hated feeling hopeless so I talked to my dad,” the 16-year-old Wilton High School student said. 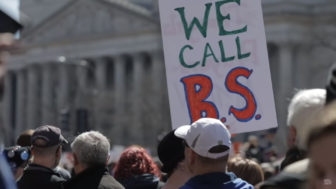 An image from the Road to Change video promoting the national “March of Our Lives” tour.

On Sunday, Segall said, her message “will mainly be about empowering young people.”

“We’ve come a long way but we have a longer way to go and we can’t lose steam,” she said.

Organizers expect nearly 2,000 people to attend the rally. That crowd will range from  young students to members of Connecticut’s political class and those who want to join it, including Democratic congressional candidates Jahana Hayes and Mary Glassman, who are competing to represent Newtown in Congress.

“I’ve been so inspired by the students from Parkland, Newtown, and all over the country who have spoken out and said they’ve had enough,” said Sen. Chris Murphy, who also plans to attend the rally.

He said “Washington has failed these kids,” because Republicans “have refused to vote on any legislation to reduce gun violence.”

“These students know that elections are the only way to change that, and they’re taking their cause to the streets,” Murphy said.

According to a recent Pew Research study, more than 50 state gun laws have been approved this year restricting access to firearms, ranging from banning “bump stocks” to “red flag” laws that allow authorities to temporarily disarm potentially violent people.

Still, the Parkland students and their relentless determination to change America’s love affair with guns has put the NRA on the defensive, both politically and through their ability to spark a corporate backlash against the powerful gun rights group.