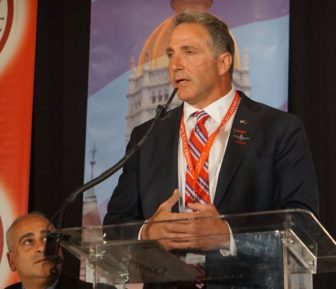 In early returns Corey was leading Rapini with more than 78 percent of the vote. The Associated Press unofficially called the race at about 8:45 p.m.

The owner of a popular bar in Hartford and a commercial window washing firm, Corey 54, had run unsuccessfully three times against Rep. John Larson, D-1st District.

Rapini, an account manager for Apple, Inc. from Branford, had raised more campaign money  and outspent Corey, who had about $30,000 in campaign cash.

Both Corey and Rapini said during the campaign they would throw their support to the other if he won the primary.