Voter turnout on par with past primaries 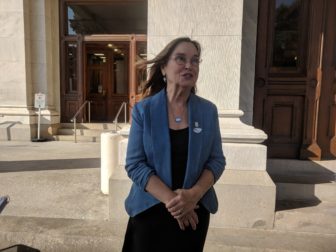 Denise Merrill talks to reporters outside the state Capitol Tuesday.

Despite a more crowded field of candidates vying for statewide office than in past primary elections, voters were not turning out in increasing numbers Tuesday.

Secretary of the State Denise Merrill said an estimated 15-16 percent of those registered with a party voted as of 3 p.m. Those 172,012 votes have been spread throughout the state, she said, with the 5th Congressional District seeing slightly higher turnout.

Merrill’s office estimates that by 8 p.m., when the polls close, turnout will be between 20-25 percent – which is on par with past primary elections.

The state’s top election official says this election has been smooth and there are no major snafus to report.

With five Republicans running for governor, Merrill said her office is bracing for a close race. An automatic recount would be triggered if the leader is ahead by less than one half a percent, or less than 2,000 votes.

“It is a major job and could cause a delay,” Merrill said, referring to a potential recount. “Obviously, it could be a very close race.”

One idea that has been floated that could increase voter turnout in future primary elections – but has not gained traction – is allowing voters to register to vote on the day primaries are held.