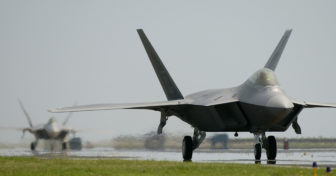 The False Claims Act complaint filed by Peter Bonzani, Jr., a former engineer at Pratt & Whitney, says the company knowingly used and concealed a defective spray coating process for parts in its F100 and F119 engines, which are used in  F-15, F-16 and F-22 fighter jets.

“As a result of Defendants’ flawed spray techniques and falsified tests… from at least 2012 through late 2015, F119 and F100 engines supplied to the Air Force are at risk for premature wear and possible catastrophic failure, putting pilots and others at risk,” the complaint said.

“There is absolutely no merit to these claims,” the company said in a statement Friday. “We intend to defend this case aggressively.”

The U.S. government has declined to intervene in the case.

The complaint was filed in October of 2016 in U.S. District Court in Connecticut, but unsealed by a judge this week. The False Claims Act allows people with evidence of fraud against federal programs or contracts to sue the wrongdoer on behalf of the U.S. government.

From September 2012 through November 2015, Bonzani worked as an independent contractor and later as a full-time employee for Pratt & Whitney in its East Hartford location, providing  automation and thermal spray expertise and services.

The complaint says Bonzani became the “go-to” person at Pratt & Whitney when it came to thermal spray coating issues and robotic programming.

The engineer said he became aware that the company used the wrong equipment to apply a sealant spray that keeps hot gasses from leaking into other parts of an engine.

“These seals are essential to engine function, engine wear and engine safety,” his complaint said.

The flawed sraying process and “fraudulently manipulated test procedures” began after the work was moved from Pratt & Whitney’s East Hartford facility to the company’s Middletown location in 2012, the complaint said.

Bonzani alleges the Middletown facility was not using the 2700 Extension for the SG-100 plasma spray gun, which he says is critical in achieving a proper seal because it enables the operator to get at the hard-to-get areas located deep within an engine.

Because the 2700 Extension has a smaller nozzle, the lawsuit said, it requires more skill and more time and precision to use.  It also wears more quickly “causing increased downtime, labor and higher costs,” the complaint said.

Bonzani said that after he reported the defective spraying at Middletown, the process was halted at that plant and temporarily moved to East Hartford. Pratt & Whitney then contracted Praxair Surface Technologies in Manchester to do the spraying, Bonzani said.

While the flawed spraying process was halted, Bonzani said Pratt & Whitney did not do anything to review the engines that were manufactured with that process.

Bonzani said the day after he brought the sealant issue to the attention of Pratt & Whitney executives, he was suspended and escorted off the company’s East Hartford plant. Ninety days later he was advised by telephone that he was fired.

Bonzani is asking the court for two times the pay he would have received had he not been dismissed by Pratt & Whitney and for reimbursement of all legal fees he has paid.

Under the False Claims Act, Bonzani is also entitled to between 15 and 30 percent of the total recovery from the defendants if he wins his case, but he said that is not his motive in filing the suit.