One big story — for the next few months

There was one big story last week that will resonate from now until November 6 – the election of the candidates competing to lead state government for the next four years.

There was no big surprise when Democrat Ned Lamont, opposed by Bridgeport Mayor and convicted felon Joe Ganim, won his party’s nomination by a lopsided margin.

On the other hand, the election of Bob Stefanowski – a self-funded political newcomer and ex-Democrat who didn’t even attend his party’s convention – was unusual. After a heavily financed TV campaign, he won the Republican primary in a field of five contenders with about 29 percent of the 142,856 votes cast. In a three-way race, State Sen. Joe Markley, considered the most conservative of the trio, won the nomination for lieutenant governor with nearly 50 percent of the votes cast.

The party favorites carried the day in all the underticket races, but not so in the 5th Congressional District, where newcomer Jahana Hayes emerged the winner over Mary Glassman, a veteran politician and public servant. In a district that leans Democratic, Hayes can potentially become one of the few minority lawmakers who represent predominantly white districts. Meriden Mayor Manny Santos won the Republican nod.

Now the trick for the nominees is to make themselves appealing to Connecticut voters of all stripes – including the unaffiliated. (Even though voter enthusiasm has apparently increased recently within the parties, the unaffiliated group is still the largest.)

Lamont will be questioning Stefanowski’s plan to eliminate the state income tax over the next eight years and will be playing up Republican’s connection to President Donald Trump, who tweeted his support for the candidate but only carried two Connecticut counties in the 2016 elections. Stefanowski, for his part, will be likening Lamont and his thinking to that of Gov. Dannel Malloy, the most unpopular governor in the United States. 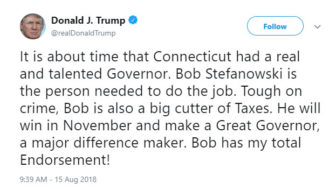 The Democrats would like the Republicans to debate social issues such as abortion, same-sex marriage and gay rights, but so far the GOP candidates are not biting. Sunday’s anti-gun-violence rally in Newtown was a magnet for lots of Democratic candidates and elected officials, including Sens. Richard Blumenthal and Chris Murphy, who has been promoting Hayes.

Outside of political circles, of course, life goes on… and not necessarily very well. 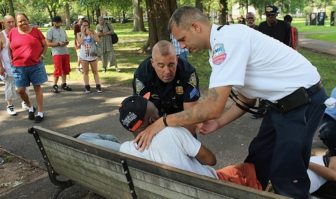 In New Haven, tainted synthetic marijuana caused 77 overdoses in the space of about a day, underscoring the severity of Connecticut’s drug fatality problem — greater than all the other New England states except Maine.

The state also lost 1,200 jobs, though the number of people seeking work did, too, holding the unemployment rate steady at 4.4 percent.

And despite the state’s ongoing financial problems and looming deficits, the state’s merged college system says it will need an 11 percent increase in state funding over the next two years to maintain current programs.

There was one bit of financial relief, at least. The federal government announced it will give Connecticut $10.6 million for school districts that took in displaced students from Puerto Rico and the U.S. Virgin Islands after Hurricane Maria wreaked widespread devastation last fall.

Federal officials will also have to deal with a whistleblower’s complaint that Pratt & Whitney Aircraft sold the Pentagon tens of millions of dollars in defective fighter jet engines, unnecessarily exposing military pilots to the risk of catastrophic engine failures.