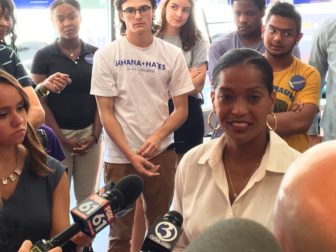 Jahana Hayes at her headquarters in Waterbury the day after winning the Democratic primary.

If Jahana Hayes succeeds in winning a seat in Congress, she will be in a select group of minority lawmakers who represent overwhelmingly white majority districts.

Hayes is the Democratic candidate for the 5th Congressional District, which has the fewest minority residents — about 12.3 percent — in Connecticut, followed closely by the largely rural 2nd Congressional district in the eastern section of the state, where the population is about 12.4 percent minority.

Hayes, who is black, defeated fellow Democrat Mary Glassman, who is white, during Tuesday’s primary election with more than 62 percent of the votes. While minority voters trend Democratic, Hayes garnered substantial support among white Democrats, winning towns in the district with few minority residents, like Goshen, Litchfield and Southbury, with more than 66 percent of the vote. (In Goshen it was 76 percent.)

Minority and white voting patterns used to be starkly divergent, but now more whites are voting for minority candidates, especially in primaries.

But there are still only a handful of minority lawmakers in Congress representing districts with an overwhelming majority of white voters.

A 2002 study by Richard Peldes, a professor of constitutional law at New York University, found that from the 1960s to the 1980s, districts needed to be more than 50 percent — some in the South as much as 65 percent — African American for a black candidate to win an election.

Today experts say the figure is closer to 40 percent.

In the 5th Congressional district, the black population is only about 8 percent.

Peldes said Hayes is helped by the election of former President Barack Obama, who broke the color barrier by winning over huge numbers of white Democratic voters.

“It’s certainly the case today that a much higher percentage of the white electorate, especially white, liberal Democrats are voting for non-white candidates at the same frequency as white candidates,” Peldes said.

He said there is still a dearth of minority candidates across the nation, but since Obama’s election to the White House “there are many more African Americans willing to run in majority white districts.”

Hayes has used footage of Obama praising her when she was recognized as the 2016 Teacher of the Year in her campaign video and television advertisement. An independent group, A New Promise, also made several videos linking Hayes to the former president.

In her victory speech Tuesday night, Hayes said, “People told us that we had no chance, no business” in upsetting the status quo by running for Congress.

While she has promoted her life story, which includes growing up in public housing and becoming a teenage mother, Hayes has run an inclusive campaign, focused on broad Democratic issues that transcend race, like education, gun control and “Medicare for All,” a proposal aimed at improving access to health care that appeals to white, liberal voters.

Ron Schurin, a University of Connecticut political science professor, said Hayes has a “compelling biography” and is not a traditional politician. But Schurin also said Hayes is “not an outsider” who might put off white voters, and is instead an exemplary educator who is willing to work within the system.

While she was not the Connecticut Democratic party’s endorsed candidate, Hayes has the backing of Sen. Chris Murphy, D-Conn., who is running for re-election this year, and other established Connecticut politicians, including Waterbury Mayor Neil O’Leary.

Former Rep. Gary Franks, who like Hayes is black and from Waterbury, represented the 5th District from 1991 to 1996 as a Republican, promoting welfare reform and opposing affirmative action. Franks ran for the Senate and was defeated by Chris Dodd.