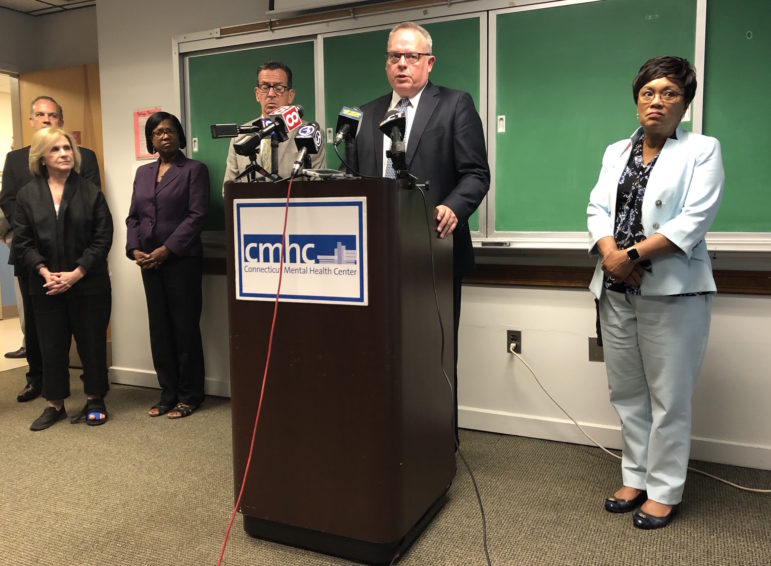 Monday’s closed-door meeting with Jim Carroll, Trump’s nominee for drug czar and current deputy director of the White House Office of National Drug Control Policy, didn’t focus just on K2, but more on the addiction epidemic in its totality, especially addiction to opioids.

During a press conference at the Connecticut Mental Health Center after Monday’s meeting, Malloy stressed that while K2 is not an opioid, a connection exists between it and the opioid epidemic.

“Many of the folks on the Green would not be there but for their opioid addiction,” Malloy said. “Every city in Connecticut has a green.”

Synthetic cannabinoids are human-made, mind altering chemicals that are either sprayed on dried, shredded plant material so they can be smoked, or sold as liquids to be vaporized and inhaled in e-cigarettes or other devices, according to the National Institute of Drug Abuse (NIDA).

Harp said Carroll “gave a listening ear to those kinds of things that we need in this community to be able to address this problem and I’m certain he is going to be taking those back to Washington.” 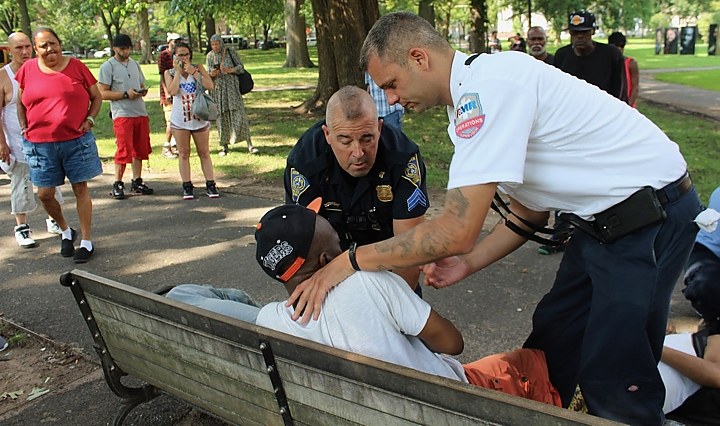 Carroll referenced data from the Centers for Disease Control and Prevention released last week which, according to early estimates, showed that about 72,000 drug overdose deaths occurred in 2017.

“It’s important that we follow through on the president’s plan to tackle this …,” said Carroll, adding that the plan includes prevention and education, treatment, and stopping drugs from entering the country.

The CDC data also showed that Connecticut experienced an increase in overdose deaths of about 10 percent, which is on par with the U.S. as a whole but higher than all other New England states except Maine, which saw an increase of around 14 percent. Massachusetts, Rhode Island and Vermont all saw declines during the same period.

In a statement Monday, Blumenthal said he urged Carroll at the Monday meeting to “seize this historic opportunity as the new federal drug czar to build bipartisan support for real action — new laws and resources that will address a national drug abuse epidemic and public health emergency.”

Blumenthal said the Senate will consider appropriations measures to provide enhanced funding for treatment and prevention of substance use disorder.

He also said the Senate should consider legislation to provide law enforcement with new tools to crackdown on synthetics and analogues, like K2 and fentanyl, coming from Mexico and China.

The sale of synthetic cannabinoids was banned nationally in 2012, according to the governor’s office.

All K2 samples collected in New Haven last week and tested by the U.S. Drug Enforcement Administration were positive for Fubinaca — a synthetic cannabinoid, according to a statement from the New Haven Police Department.

Synthetic cannabinoids act on the same brain cell receptors as THC (delta-9-tetrahydrocannabinol), the mind-altering ingredient in marijuana, according to the National Institute of Drug Abuse.

Few scientific studies of the effects of synthetic cannabinoids on the human brain have been done, but researchers do know that some of them bind more strongly than marijuana to the cell receptors affected by THC, and can produce much stronger effects. The resulting health effects can be unpredictable and dangerous, according to NIDA.

Synthetic cannabinoid users report some effects similar to those produced by marijuana: elevated mood, relaxation, altered perception and symptoms of psychosis, according to NIDA.