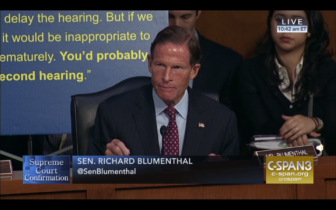 Washington — Connecticut Sen. Richard Blumenthal, one of the leading voices opposing the nomination of Judge Brett Kavanaugh to the Supreme Court, called for the adjournment of Kavanaugh’s confirmation hearing almost immediately after it began Tuesday.

Amid chaos created by the shouts of protesters, who were dragged out of the cavernous hearing room by Capitol Police, Blumenthal led demands by Democrats on the Senate Judiciary Committee to hold a roll-call vote on whether to halt the proceedings until all of the documents pertaining to Kavanaugh’s employment at the White House could be reviewed.

“We have turned this hearing into a charade,” Blumenthal said.

Sen. Charles Grassley, R-Iowa, the chairman of the Senate Judiciary Committee held firm, saying that Democrats would have a chance to have their say over four days of confirmation hearings that could stretch into the weekend, if need be, and that Blumenthal’s request for a vote was “out of order.”

“The motion is not out of order just because the chairman says it’s out of order,” Blumenthal retorted.

Grassley said the hearing is not in executive session — but in a session to consider a nominee — and he could not hold a vote on Blumenthal’s motion.

“If there is no vote this process will be tainted and stained forever,” Blumenthal said.

Democrats said that they had been provided with a new release of 42,000 pages of documents on Monday night, which no senator had time to read. They also said those documents were classified as “committee confidential,” preventing their public release and likely stopping Democrats from citing them during the hearing.

One after another, committee Democrats insisted on a vote on Blumenthal’s motion to adjourn the hearings for days or even weeks, to be able to obtain and read all those documents.

“Even the documents you have requested, we have not received,” said Sen. Cory Booker, D-N.J. told Grassley. “What is the rush?”

Kavanaugh, a federal appeals court judge who would replace retired Justice Anthony Kennedy and would be a reliable conservative vote on the high court, sat stone-faced during the frequent disruption of protesters and the revolt by Democratic Judiciary Committee members.

He brought his two young daughters, wife, parents and other family members to the hearing and is expected to say he will be “a neutral and impartial arbiter” if confirmed, according to excerpts of his opening statement.

Senate Majority Whip John Cornyn, R-Texas, said the Democrats’ behavior would lead them to be “held in contempt of court,” if the confirmation hearing were a court proceeding, prompting a chorus of quiet boos.

Cornyn also said the Democratic disruption of Tuesday’s proceedings, in which the 19 members of the committee and Kavanaugh are to give their opening statements, had tuned into “mob rule.”

Other Republicans said there have been an unprecedented release of documents about Kavanaugh.

“We’ve received twice as many documents for Judge Kavanaugh as we have for any Supreme Court  nominee in history,” said Sen. Orrin Hatch, R-Utah.

Democrats, including Blumenthal, continued to press for a delay of the proceedings during their opening statements — and urged Kavanaugh to join their cause.

Blumenthal said that during the rounds of questioning of Kavanaugh on Wednesday and Thursday he would ask the nominee about his position on specific Supreme Court cases, including the abortion-rights case Roe v. Wade, that liberals fear could be overturned if the court tips to a conservative majority.

He said he would ask Kavanaugh about statements he made to conservative groups, including the Heritage Foundation and the Federalist Society, regarding Roe v. Wade and other Supreme Court rulings. Those groups vetted Kavanaugh and the other candidates President Donald Trump considered for the latest opening on the Supreme Court.

“You have done everything in your power to show those far-rights groups you would be a loyal soldier for their cause,” Blumenthal said.

Sen. Ben Sasse, R-Neb., said the harsh criticism of the nominee has little to do with Kavanaugh’s record, but is an indication that the Supreme Court has turned into a political battlefield.

“The deranged comments actually don’t have anything to do with you,” Sasse assured the nominee.”

Sasse, and fellow Republican Sen. Jeff Flake of Arizona, however, chastised Trump for criticizing Attorney General Jeff Sessions in a tweet for the indictments of two Republican members of Congress on corruption charges this close to midterm elections.

“The comments from the White House yesterday about trying to politicize the Department of Justice — they were wrong,” Sasse said. “And they should be condemned, and my guess is Brett Kavanaugh would condemn them.”

In excerpts from his prepared statement, Kavanaugh said he would be an “umpire” on the Supreme Court who would work with the other justices to determine the law.

“If confirmed to the Court, I would be part of a Team of Nine, committed to deciding cases according to the Constitution and laws of the United States,” Kavanaugh’s statement said. “I would always strive to be a team player on the Team of Nine.”