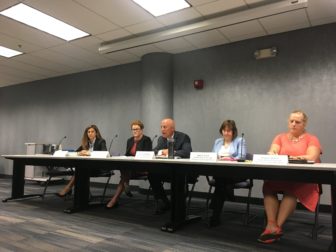 Paul Lombardo, flanked by other Connecticut Insurance Department staff, speaks during the public hearing on Wednesday.

Along with individual plan proposals, the carriers also filed rate increase requests for small group plans—both types are marketed through Access Health CT, the state’s health insurance exchange. The department made the filings public in July.

“I would also like to suggest health care is not a privilege for a slice of the community, but for everyone, and for that reason I think affordability is an appropriate consideration here,” Block said.

Block asked if any money derived from increased rates would go toward improving provider lists, stating insurance shouldn’t only be affordable but accessible.

Steven Ribeiro, the regional vice-president of sales for Anthem, said the company has continued to experience rising health care costs, and predicts the individual market will keep shrinking while people with greater health care needs retain their coverage.

“The uncertainty faced in 2019 is driven in large part by the individual mandate penalty being removed and the potential shift of members due to changes in federal guidance in the individual market,” Ribeiro said.

ConnectiCare Chief Operating Officer Robert Kosier echoed those concerns, and stated the carrier has seen enrollment in the individual market decrease by 25 percent in the last three years.

“These individuals tend to be younger and healthier, resulting in higher costs for those who remain in the individual market,” Kosier said. “We expect that the removal of the financial penalties associated with the original mandate will further accelerate this trend.” 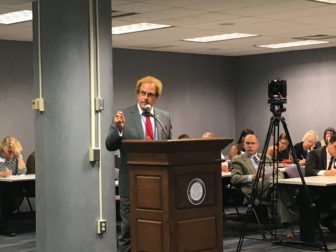 Rep. Tom Delnicki, R-South Windsor tells representatives from Anthem and ConnectiCare not to raise rates during the public hearing on Wednesday.

“If you want to keep people in and buying ConnectiCare and Anthem plans, you can’t have these double digit, or nearly double digit increases,” Delnicki said. “I hear it almost every day from the people in my district that they have to make very difficult choices. Are they going to buy food, buy clothes for the kids, or pay for the plan?”

Rose Ferraro of Universal Health Care Foundation of Connecticut said advocates understand rate review is an actuarial exercise for regulators, but noted “rising premiums are not an abstract math problem for families.” Ferraro urged the stakeholders to address consumer affordability.

The department plans to make final rulings in September. Open enrollment for the 2019 coverage year begins on Nov. 1.