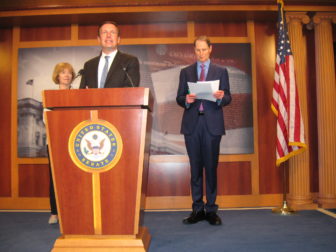 Washington – Democratic lawmakers warned Wednesday of a “double whammy” that would obliterate the Affordable Care Act — a case being argued before a Texas judge that could result in a repeal of the health care law, and the likely confirmation of Judge Brett Kavanaugh to the Supreme Court.

Democrats warned that a popular provision in the ACA requiring insurers to cover people with pre-existing health conditions –which includes a wide range of ailments, from sleep apnea to cancer – is in danger of disappearing.

The latest threat to the ACA, and its protections for people with pre-existing conditions, arises from a lawsuit filed in February by the Texas attorney general and 19 of his GOP counterparts.  Connecticut and a number of other “blue states” are defending the ACA in the lawsuit since the Trump administration declined to do so.

The suit, before U.S. District Judge Reed O’Connor, a Republican appointee, alleges that the ACA is unconstitutional because a recent federal tax law will soon end a penalty for Americans who violate the law’s requirement that most people carry health insurance.

That case is likely to be appealed to the Supreme Court, and Democrats like Connecticut Sen. Chris Murphy say Kavanaugh would be a key vote that could uphold the ACA’s repeal.

“This isn’t about American families. This is about a political judge against President Obama,” Murphy said at a press conference in the U.S. Capitol Wednesday.

The Affordable Care Act is considered one of Obama’s most important accomplishments, but it has always been embroiled in politics and controversy.

Despite the controversy, polls show the protections for people with pre-existing conditions is one aspect of the law that has wide popular support.

While Democrats may lose in a Texas courtroom, they hope to win in the court of public opinion. Many Democratic candidates are running for reelection on their support for upholding protections for people with pre-existing conditions.

But Murphy said “whether or not there is a political advantage,” Democrats will defend the ACA and its protections for people with pre-existing conditions in this election year “because this is what people tell us they are concerned about.”

Sen. Thom Tillis, R-N.C., recently introduced a bill with the support of nine other Senate Republicans, the “Ensuring Coverage for Patients with Pre-Existing Conditions Act,” that says no insurer may reject an insurance applicant based on his or her medical condition or history

But the legislation would allow insurers to exclude coverage of an applicant’s preexisting condition.

“Senate Republicans know they are in trouble with millions of Americans with pre-existing conditions,” said Sen. Ron Wyden, D-Ore. “What Republicans are really pushing is a political safety net….This bill is a wolf in sheep’s clothing.”

Connecticut law prohibits insurers from denying coverage to residents with pre-existing conditions in most of the policies they sell here.

But that protection, as well as the state-mandated “essential health benefits” all insurers in the state must provide, is predicated on the existence of the ACA and would be vulnerable to repeal if the health care law no longer existed.

Connecticut Democrats released a statement Wednesday calling attention to what they called GOP support for ending this protection under the ACA. Specifically, the statement singled out Joe Markley, GOP candidate running for lieutenant governor, for “being one of the only Senators in the legislature to vote against continuing to cover pre-existing conditions.”