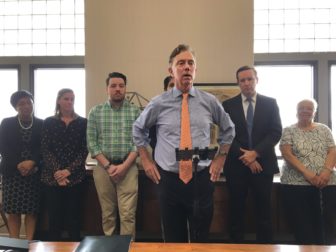 The Democrats launched their criticisms during a joint press conference inside the New Haven Health Department clinic Friday morning, taking advantage of an opportunity to share a soapbox while they respectively campaign for Congress and the governorship.

Stefanowski’s campaign quickly dismissed the guilt-by-association criticism, saying the candidate is focused on improving the state’s economy, which will allow Connecticut to invest more in health care and education.

“The truth is that Bob Stefanowski opposes any efforts to remove coverage for pre-existing conditions,” said Kendall Marr, campaign spokesman for Stefanowski, in an email. “Bob would also only appoint an insurance commissioner whose chief concern is providing consumers with the best possible service.”

Murphy said there should be a partnership between the state’s federal delegation and Connecticut’s next governor to ensure residents are protected against “the worst of Trump’s health care agenda.”

“I don’t think that Donald Trump would have been so enthusiastic in his support for Bob Stefanowski if he didn’t have confidence that Stefanowski was going to help him in his health care sabotage campaign,” Murphy said. “If we don’t have a governor and a state legislature that is standing up to Trump’s health care sabotage campaign, consumers and patients are at risk in Connecticut.”

The Trump administration issued final rules in August allowing the sale of the short-term plans, which were promoted as a cheaper alternative to Affordable Care Act coverage and an expansion of insurance options. The limited duration plans do not need to cover pre-existing health conditions.

But the Connecticut Insurance Department quickly determined that state law prohibits the sale of those plans—with statutes in place baring exclusions for pre-existing conditions for any policy that has coverage of six months or longer.

Under state law, policies with coverage periods shorter than six months can exclude coverage for people with pre-existing conditions.

Lamont said he would fight for community health clinics and make sure that benefit packages stay intact. He argued Stefanowski would gut the state’s health care plan and likely cut those clinics.

Murphy emphasized the legislation passed in Connecticut helps protect  residents, but shouldn’t be taken for granted.