Washington – The Senate Judiciary Committee voted along party lines to advance Brett Kavanaugh’s confirmation to the Supreme Court, but the nomination hit a snag when a key Republican pressed for an FBI investigation of allegations of sexual misconduct by the judge. 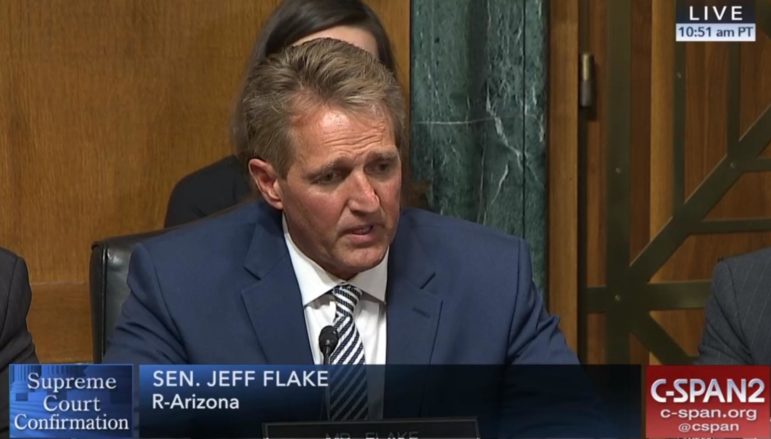 Concerned about GOP defections from  a speedy Senate confirmation of Kavanaugh, the White House and Republican leaders agreed to postpone the vote and reopen the FBI’s background check of the nominee.

The move came after Sen. Jeff Flake, R-Ariz., who said earlier in the day he would vote for the confirmation, indicated he would withhold his support for Kavanaugh unless the FBI conducts a new investigation.

“We can have a short pause and make sure the FBI can investigate… It can be short and limited in scope to the current allegations that have been made,” Flake said.

Flake had been speaking with a number of Democrats on the committee, especially Sen. Chris Coons, D-Del., who were seeking a slowdown of the confirmation process until allegations of sexual misconduct against Kavanaugh that have recently surfaced could be investigated by the FBI.

“This country is being ripped apart here,” Flake said. “We’ve got to make sure that we do due diligence.”

“The supplemental FBI background investigation would be limited to current credible allegations against the nominee and must be completed no later than one week from today,” the committee said in a statement.

Although the White House agreed to reopen Kavanaugh’s background check, it was not clear whether the scope of the investigation will include allegations by two women, in addition to Ford, who have accused Kavanaugh of sexual misconduct.

Others say one week is not long enough for the FBI to conduct a thorough investigation, even if it limits its investigation to Ford’s claims.

“It is promising and encouraging,” said Sen. Richard Blumenthal, D-Conn. “But the investigation has to be more than a check-the-box week-long show. It has to be penetrating and complete.”

Republican leaders were pressured to heed Flake’s call for an investigation because of their narrow 51-49 majority. If  all Democrats and just two Republican senators vote “no” on Kavanaugh, he will not be confirmed.

While GOP leaders agreed to hold off the Senate confirmation vote for a week,  they still plan to move ahead with a procedural vote on Kavanaugh’s nomination on Saturday. 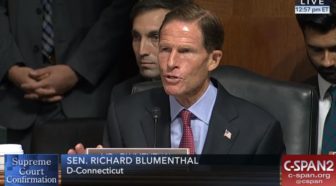 Blumenthal tried to halt the nomination Friday morning with a motion in the Senate Judiciary Committee – defeated on a party line vote – to subpoena the nominee’s high school friend, Mark Judge.

“It is our constitutional duty to uncover the truth,” Blumenthal said.

Blumenthal also was also on the front line of Democrats who were asking for a new FBI investigation of the candidate, saying senators need more information about Judge and others who could corroborate or knock down the allegations against Kavanaugh.

Judge was the third person in the room identified by Christine Blasey Ford when Kavanaugh allegedly sexually assaulted her at a house party when both were teenagers.

“The third person in the room was Mark Judge, who was never questioned by the FBI or interviewed by the committee,” Blumenthal said.

Another accuser, Julia Swetnick, said when she and Kavanaugh were in high school, the nominee lined up with other boys, including Judge, who were waiting to “gang” or “train” rape inebriated girls at many parties — and that she once became a victim herself.

Judge is likely to be a prominent figure in a new inquiry by the FBI. On Friday, Judge’s attorney, Barbara Van Gelder, said her client would be available for questioning by the FBI.

“If the FBI or any law enforcement agency requests Mr. Judge’s cooperation, he will answer any and all questions posed to him,” Van Gelder said.

Sen. Ted Cruz, R-Texas, had ridiculed Blumenthal’s attempt to subpoena Judge, calling it a political ploy. “It’s not complicated what would happen,” Cruz said. “Any defense lawyer would tell him not to testify.”

Cruz said Democrats want to create a “political spectacle” by forcing someone who is “struggling with addiction” to “plead the 5th.”

At one point during the Judiciary Committee meeting, Blumenthal and other Democrats walked out in protest. Others bitterly complained about the process.

Meanwhile, Republicans on the panel continued to call the allegations of sexual abuse by Kavanaugh politically motivated attempts to derail the nomination.

Those allegations include an accusation by  Shelton, Conn., native Deborah Ramirez that the nominee exposed himself to her at a dorm party at Yale University when they were both freshmen.

Others, including Sen. Lindsey Graham, R-S.C.,  indicated Democrats tried to kill the nomination by leaking to the press a letter from Ford to Sen. Dianne Feinstein of California, the top Democrat on the judiciary panel.

In that letter, Ford recounted the alleged attack at the high school party 36 years ago and asked for anonymity. Ford said she came out publicly with the story after reporters showed up at her home and the University of Palo Alto in California where she was teaching.

“Someone betrayed her trust and if you can’t figure it out, you shouldn’t be driving,” Graham said.

Feinstein denied that she and her staff leaked the letter. She criticized Kavanaugh for his partisan attacks on Democrats when he testified before the panel Thursday, calling some of them an “embarrassment,” and for his aggressive and hostile responses to some Democratic senators who questioned the nominee.

“I have never seen anyone who wants to be elevated to the highest court in the nation behave in that manner,” Feinstein said.

Blumenthal also said Kavanaugh’s “screed” during Thursday’s hearing convinced him the nominee did not have the “temperament and fairness” to sit on the Supreme Court.

“His views are disqualifying for me, but his character and temperament are also a reason to vote ‘no,'” Blumenthal said.

Flake’s surprise move turned down the partisan rancor stirred up by Kavanaugh’s nomination.

“I would advocate for (Flake’s) position, but I don’t control (the confirmation vote),”  Grassley said.

Sen. Amy Klobuchar, D-Minn., said Democrats “are in a better place than we were at 8 a.m. this morning.”