Hayes, Santos disagree on, well, pretty much everything in CT-5

On a day when a national prognosticator moved the race from ‘likely Democratic” to “safe Democratic,” Hayes arrived with a sense of riding a wave in a state where no Republican has won a congressional race in 12 years. If elected, she could be one of the first two black women elected to Congress from New England.

Trump was not mentioned by name during the one-hour debate, but he was ever present: The 2018 agenda for congressional candidates is a reflection of Trump’s agenda over his two tumultuous years. On the key issues raised Thursday, Santos was with the president and Hayes was not.

The differences were even starker when the debate ended and both candidates faced questions from reporters about a topic unaddressed during the forum: The nomination of Brett Kavanaugh to the U.S. Supreme Court, the woman who accused him of sexual assault, and how Congress and the president has treated the nominee and his accuser.

Both candidates expressed dismay with the confirmation — Santos, by how Kavanaugh was treated by Democrats in the Senate; Hayes, by how Christine Blasey Ford was belittled by Republican men in Congress and the president.

Santos and Hayes are competing for a seat that unexpectedly became open in April. U.S. Rep. Elizabeth Esty, D-5th District, facing criticism for mishandling of her former chief of staff’s abusive behavior towards a younger female employee, abruptly announced she would not seek a fourth term.

The 5th District is generally competitive when open, but “Sabato’s Crystal Ball,” a newsletter edited by political scientist Larry Sabato, marked it Thursday as “safe Democratic.” Santos, like other Republican congressional candidates in Connecticut, has struggled to raise money.

“I am a child of Waterbury,” Hayes said, introducing herself Thursday at the forum attended by members of the Waterbury Regional Chamber.

She summarized her biography as a girl who grew up in a housing project, the daughter of a drug addict. Hayes became a single mother as a teen, but stuck with education at two state schools, Naugatuck Valley Community College and Southern Connecticut State University. She has a master’s degree from the University of St. Joseph.

“I am not looking for a world where everyone gets a free ticket,” she said. “The opportunities I just described to you, everyone should have the same access.”

Santos introduced himself as a veteran, immigrant and former mayor of Meriden.

His family emigrated from Portugal when he was a child. He served as a Marine during Operation Desert Storm, trained as a jet mechanic and rifleman. Without mentioning Hayes by name, he denounced liberal politics in his opening remarks, including “policies espoused by my opponent.”

He aligned himself with the president on tax cuts, tariffs and the North American Free Trade Agreement, which Trump recently renegotiated with Mexico and Canada.

“I can tell you that NAFTA didn’t work for us, and I am a casualty of it,” Santos said.

Santos, who has a degree in mechanical engineering from the University of Connecticut, said he lost his job with an automotive supplier that moved its work to Mexico. He now is an analyst with United Health Group.

Hayes said she thought American workers and employers lost more than they gained from Trump’s trade wars, especially the escalating fight over tariffs.

“This tit for tat does not work,” she said.

Santos said the Affordable Care Act should be repealed. Hayes said it should be improved

The candidates seemed more engaged addressing reporters after the debate, even if Santos  grew annoyed when questioned about the Kavanaugh nomination.

“Judge Kavanaugh was not afforded the respect and the treatment that he is deserving for the position,” Santos said, faulting Democrats for introducing the assault allegation late in the process. “They brought that out as a Hail Mary or a last resort. That’s not the way our system is supposed to work.”

And his thoughts on Ford, the college professor who accused Kavanaugh of assaulting her while they were high school students?

“I think she was treated with great respect,” Santos said. 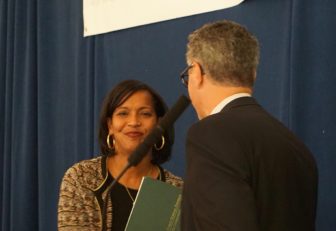 “This week, I think the testimony of the accuser as fallen apart,” Santos said. He signaled reporters to move on. “How about asking me some questions related to the position I am running for? This has nothing to do with the House of Representatives.”

Hayes, who was a Waterbury high school teacher when chosen national teacher of the year in 2016, said the willingness of many politicians and observers to downplay the allegations against Kavanaugh as drunken misbehavior was troubling.

Hayes said Kavanaugh treated his questioners with contempt, displaying a temperament unfit for a judge. But she would not favor any move in the House to impeach him, should he be confirmed.

The confirmation and Trump are elements of the campaign, she said.

“I think its’ definitely fueling voter interest. Last night at my headquarters, we had a woman-to-woman phone bank,” Hayes said. “We brought in a representative from Safe Haven to share information with all of the women who came to phone bank and educate them on the resources  and the services available in their community. People are recognizing that their vote has so much power if they want their voice to be represented.”

Safe Haven is a service for women escaping domestic abuse.

“We did an education session as part of our campaign,” Hayes said. “My responsibility, or what I’d like to do, is is educate people moving forward to be their own best advocate and not rely on elected officials or government.”