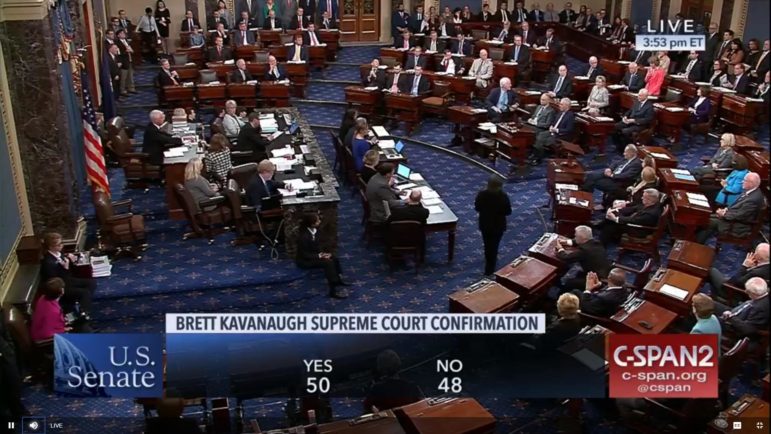 Washington – Judge Brett Kavanaugh was confirmed by a narrow vote in the Senate Saturday after a bitter and partisan battle over his nomination that included allegations of sexual misconduct.

The nominee to the nation’s highest court was sworn in later that day.

The 50-48 largely party-line vote was expected after several undecided senators, including Sen. Susan Collins R-Maine, declared on Friday they would support the nominee. Both of Connecticut’s Democratic senators voted against Kavanaugh’s confirmation.

Sen. Richard Blumenthal described the confirmation vote as “the saddest and angriest time in the U.S. Senate.”

“The damage done today will be enduring – to the United States Supreme Court and to our country,” Blumenthal said.

Sen. Chris Murphy warned there would be a backlash against Republican candidates in November’s mid-term elections.

“There is only one remedy,” Schumer said. “Change must come from where change in America always begins: the ballot box. So to Americans—to so many millions who are outraged at what happened here, there’s only one answer: vote.”

Vice President Mike Pence, who presided over the vote in case he was needed to break a tie, was met with angry protesters chanting “vote them out” when he left the U.S. Capitol.

Republicans defended Kavanaugh’s record as an attorney and a federal judge — and as a husband and father of two young girls. They said the allegations of sexual abuse that were leveled against him were part of a Democratic campaign to “smear” the nominee.

“While the American people will not soon forget the unfair and unjust behavior that led us to one of the Senate’s lowest points in decades, today we took an important step in overcoming the politics of personal destruction,” said Sen. Orrin Hatch, R-Utah.

In a tweet sent shortly after the vote, President Donald Trump said, “I applaud and congratulate the U.S. Senate for confirming our GREAT NOMINEE, Judge Brett Kavanaugh, to the United States Supreme Court. Later today, I will sign his Commission of Appointment, and he will be officially sworn in. Very exciting!”

Opponents of Kavanaugh’s nomination fear he will move the Supreme Court to the right for decades if confirmed. The bitter partisan fight over the nomination shredded Senate decorum and is likely to leave a bitter political aftertaste.

Kavanaugh’s confirmation process was thrown into tumult by several allegations of sexual misconduct.

Until his first accuser, California professor Christine Blasey Ford went public with her accusations that Kavanaugh sexually assaulted her at a party when they were teenagers, the judge’s confirmation seemed assured.

But her account before the Senate Judiciary Committe led to other allegations and  prompted a last-minute F.B.I. inquiry into the judge’s conduct.

Judge Kavanaugh vigorously denied the allegations in angry and emotional testimony before the Judiciary Committee, prompting critics to say the nominee did not have the ““temperament” to be a judge.

Just hours before Saturday’s vote, Deborah Ramirez, who said Kavanaugh thrust his genitals in her face during a drunken dormitory party at Yale, issued a statement condemning lawmakers who supported the nominee.

“Thirty-five years ago, the other students in the room chose to laugh and look the other way as sexual violence was perpetrated on me by Brett Kavanaugh,” Ramirez said. “As I watch many of the Senators speak and vote on the floor of the Senate I feel like I’m right back at Yale where half the room is laughing and looking the other way. Only this time, instead of drunk college kids, it is U.S .Senators who are deliberately ignoring his behavior.”