Bob Stefanowski addresses a unity rally. Behind him are Matt Corey, Thad Gray and Joe Markley.

Southbury — President Donald J. Trump generates enthusiastic crowds at campaign rallies elsewhere, but he was rarely mentioned Saturday by Republicans at a unity rally in Connecticut, where activists were reminded all politics is local, and the only issues that matter are taxes and the economy.

Danbury Mayor Mark Boughton both introduced Republican gubernatorial nominee Bob Stefanowski at the rally and endorsed the candidate’s blinkered view of the campaign as revolving around a single issue —his supply-sider’s approach to slashing taxes to stimulate economic growth.

The rally in a function room at Pomperaug Regional High School was the first for the entire statewide ticket since Stefanowski, a businessman seeking office for the first time, defeated Boughton, who was the front-runner as the GOP convention-endorsed candidate. On a rainy and raw Saturday, it filled a room with seating for about 200.

Stefanowski, who trailed Democrat Ned Lamont by eight percentage points in a Quinnipiac University poll released Wednesday, pronounced the race a dead heat and said his campaign’s tight focus on fiscal issues have framed the campaign.

“We have an argument right now about who the better tax cutter is going to be. That’s the turf we want to be on. That’s why we’re going to win this election.” Stefanowski said. “I’m going to focus on what matters in Connecticut, which is this economy.”

Matt Corey, the nominee for U.S. Senate, taunted Sen. Chris Murphy, the Democrat seeking a second term, for refusing to debate him more than once. “He’s not man enough to stand on stage with me,” said Corey, the owner of a bar and a window-washing business.

Stefanowski’s approach has generated some quiet grumbling among Trump supporters who would like to see the party celebrate the president’s tax cutting, his nomination of conservative Brett Kavanaugh to the Supreme Court, the nation’s historically low unemployment, and an economy seen as strong until the stock markets faltered in recent days.

State Sen. Eric C. Berthel, R-Watertown, whose district includes Southbury, said he has heard those complaints, but does not share them: “What’s going on in Washington is being used as a distraction in Connecticut.”

Trump figured more prominently at a Democratic rally in New Haven, one in a series of smaller events Democrats staged across the state with an eye towards keeping activist closer to their communities on one of the four weekends before Election Day.

“It could not be more clear now that if you’re a woman, if you’re an immigrant, if you’re a Connecticut taxpayer, if you live in the city of New Haven—the president of the United States has declared war on you and your family,” said Rep. William Tong of Stamford, the Democratic nominee for attorney general.

Murphy cast the stakes of the election in near-apocalyptic terms. “And if we don’t win this election … we will also potentially put this country on a slow descent away from democracy, away from democratic norms, to a country that none of us may eventually recognize,” Murphy said. 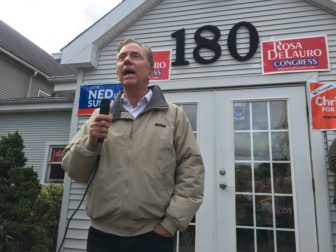 Secretary of the State Denise Merrill said Trump’s election has energized the Democratic base, bringing in a surge in young voters.

“We have the biggest surge in voter registration in the history of the state — 275,000 new voters since that fateful day in November of 2016, and the biggest number is 18 to 24-year-olds,” Merrill said. “I’ve waited all my life for this moment. There are four times as many 18-to-24-year-olds registering to vote this year than ever before.”

Susan Hatfield, the GOP nominee, told Republicans at their rally that Tong speaks so frequently of Trump that he sounds less like a candidate for state office than for president.

Sen. Joe Markley of Southington, the GOP nominee for lieutenant governor, said unity rallies are important, even if they take activists off the streets and only put the candidates in a place where they are preaching to a choir.

“I think the purpose of it is pretty clear,” Markley said. “The choir is the group that you count on to go out and proselytize. We need them not simply supporting us, but fired up to go out and work for us. You can produce a kind of an energy at an event like this that I think is good for everyone who takes part in it.”