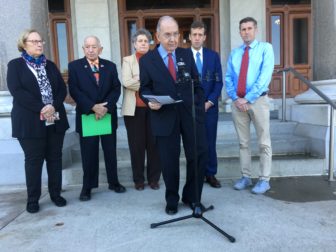 The PAC has reported contributions by RSLC of $800,000 and its treasurer, William Phillips, of $500. It has spent money on ads, mailers, polling, and strategy consulting.

“Outside spenders know because of our budget under public financing exactly how much they will be increasing the budget of a publically funded campaign by spending outside money,” Looney said.

The RSLC is a 527 group comprising of major corporate and conservative donors like Koch Industries and Wal-Mart. In June, U.S. Education Secretary Betsy DeVos’ family contributed $250,000 to the national group.

“The public deserves to know who raised their taxes to unreasonable, backbreaking levels,” Change Connecticut spokesman William O’Reilly said in an emailed statement. “These legislators clearly don’t want the truth known. If they were proud of their tax votes, they wouldn’t be protesting. That’s the bottom line.”

O’Reilly said Phillips is leading strategy for the PAC.

“They want to tilt the playing field and keep their special interests getting additional resources and additional seats,” Bye said.

Cassano said he has been the target of hundreds of thousands of dollars in outside spending in his last four elections.

“Let me make it very, very simple and very, very clear—people from the rest of the country shouldn’t be affecting what’s going on in my senate district. My district is not for sale,” Cassano said.