Life — and politics in Connecticut — is not necessarily fair

Is all of politics, at its most fundamental, a struggle to make society more fair?

Certainly in Connecticut there is plenty of social inequity to talk about.

As the Nov. 6 election approaches, of course, the candidates for governor, U.S. Congress and the state legislature identify all sorts of social and economic disparities that, one way or the other, need to be addressed. One kind of disparity is glaringly obvious: the amounts of money the various candidates have to pursue their campaigns.

Connecticut, for all its great wealth overall, still has huge disparities in some of life’s most basic needs: health care, for example, where the life expectancy of the most wealthy residents is predicted to be more than a decade longer than that of the poor. Quality housing, too, seems inextricably linked to wealth and race in Connecticut, where a majority of black and Latino households in live in areas with high crime and poverty rates, low-performing schools, and a lack of employment opportunities.

Race is sometimes overtly at the heart of the political debate, as was concern about the enrollment and graduation rates at the U.S. Coast Guard Academy in New London or the white-to-black student ratio at the Hartford region’s network of themed magnet schools. 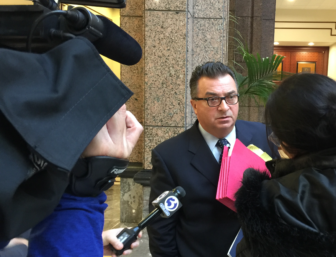 Racial bias among local police – as evidenced by the frequency of their traffic stops of black vs. white motorists — is also a periodic concern as it was last week following the release a new report by the Central Connecticut State University Institute for Municipal and Regional Policy.

Racial differences have a bearing on the political atmosphere in more subtle ways, too.

Take Democrat Jahana Hayes and Republican Manny Santos in their bid for U.S. Rep. Elizabeth Esty’s 5th District seat in Congress. Hayes, who if elected would be the first black Democrat represent Connecticut in Congress, has gotten a lot of campaign money from out of state; and from members of the all-Democratic Connecticut congressional delegation; and from political action committees. She has amassed a political war chest of nearly $1.3 million compared to Santos’ $52,000.

The two 5th District contenders are about as far apart on the issues as they are in campaign finances.  Esty, meanwhile, with no race to run, is busy finding a number of ways to spend her leftover campaign fund.

The state’s congressional Democrats have a lot more campaign money to spend than their challengers.  U.S. Rep. Jim Himes, D-4th District, for example, has greatly out-paced his Republican challenger Harry Arora in fundraising.

In general it is hard to unseat an incumbent from either party, as U.S Rep. John Larson’s opponent Jennifer Nye well knows. That is probably why a national political action committee has poured a lot of money into the races of  Republican candidates for state senate.

The issue of the year, of course, is the state’s terrible financial situation and what is to be done about it. 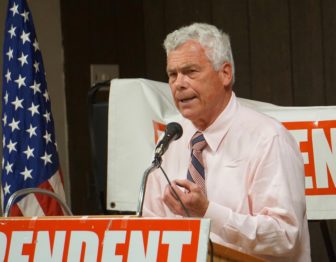 And as one might expect in the final weeks, the debate among gubernatorial candidates is starting to get testy. Oz Griebel, an independent candidate, was particularly irritated by Republican Bob Stefanowski’s oft-cited pledge to re-fire the state’s economy by eliminating the state income tax (that’s half the state’s revenue) over eight years. In the face of a projected $4.6 billion state budget deficit awaiting the next governor, Griebel calls Stefanowski’s position “a lot of utter nonsense.”

Democratic contender Ned Lamont last week disclosed income tax filings that show an adjusted gross income of $3.6 million, saying “This is about transparency, and about being open and honest with voters.”

His fellow Democrats in the legislature, meanwhile, attacked Stefanowski’s background as chief executive of a payday lending company now barred from doing business in Connecticut because of its industry’s “unscrupulous” and “illegitimate” practices.

For his part, the Republican put out a TV commercial showing his softer side even as a Republican super PAC intensified its opposition to Lamont.

Elsewhere, as the employment picture improved, two of the businessmen who led the development of a comprehensive plan to dig the state out of its financial hole quietly continued to travel the state in an effort to persuade legislators to take another look at it next session.

Economies can be influenced by events near and far, however. The apparent murder of Saudi Arabian dissident Jamal Khashoggi in Turkey could result in sanctions that derail the sale of millions of dollars worth of Connecticut-built helicopters and aircraft engines.