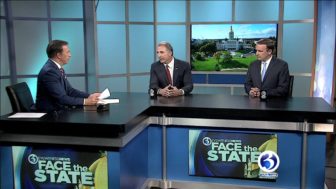 U.S. Senate candidates Chris Murphy and Matthew Corey clashed Friday over taxes, immigration, foreign affairs and the fate of the Supreme court in their sole debate of the election.

Murphy, the Democratic incumbent, and Corey, his Republican challenger, sparred for nearly 25 minutes at the studios of WFSB Channel 3 in Rocky Hill. The forum was streamed live on WFSB.com and will air at 8:30 a.m., Sunday, on that station’s political affairs program, Face The State.

Murphy didn’t hold back on his criticism of the GOP throughout the debate, calling the federal tax changes enacted by a Republican-controlled Congress and signed by President Donald Trump “an abomination” and “an assault on Connecticut.”

Much tighter limits on the state and local tax payments that can be claimed as deductions — restrictions that will be felt most severely in blue states that opposed Trump — will cost Connecticut taxpayers an estimated $1 billion per year, the senator said.

But Corey said the federal tax cuts are the reason the nation’s economy is surging. “Businesses are thriving because of that,” he said, adding that Murphy’s opposition to Trump has left Connecticut “looking in from the outside in Washington.”

Although he has been a consistent and vocal critic of the president, Murphy said it was premature to say Trump should be impeached, adding that it is important to await the results of special counsel Robert Mueller’s investigation into any possible links between Trump’s 2016 presidential campaign and the Russian government.

But Corey accused Democrats of already having an impeachment plan in place if they win a majority in the House next month. “They’re going to impeach this president,” he said, adding he believes they also would attempt to impeach recently-confirmed U.S. Supreme Court Justice Brett Kavanaugh. 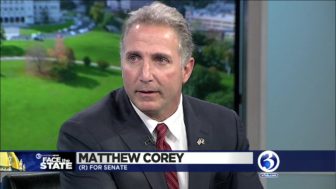 Corey argued that Trump is trying to overcome the federal government’s failure for years to properly regulate immigration. He cited a controversial report that a caravan of thousands of migrants that originated in Honduras earlier this month — and is headed for the U.S. —  contains about 100 terrorists, including many ISIS members, who were detained near the Guatemalan border.

“That is an internet hoax,” responded Murphy, who charged the president with using the immigration issue as a “political wedge” to promote fears about people of different ethnicities.

Trump has suggested that terrorists from the Middle East are mixed in among the Honduran migrants, a claim for which the administration later conceded there was no proof.

Referring to the population of the caravan, which is estimated to now contain about 7,000 people, Murphy added “These are people who are trying to protect their children.”

When asked how the nation should respond to the killing of Washington Post journalist Jamal Kashoggi in the Saudi Arabian consulate in Istanbul, Corey said the U.S. should not restrict arms sales to Saudi Arabia.

“There’s half a million jobs at stake,” he said, referring to defense contractors like those at East Hartford-based Pratt and Whitney. 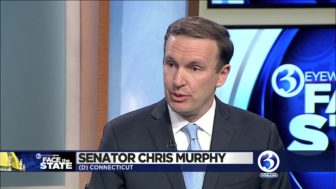 In contrast, Murphy said the Trump administration’s response to the killing of a Kashoggi, a U.S. resident, has been “weak” and that “one thing we should clearly stand for is freedom of the press.”

Murphy said the U.S. should impose sanctions that would weaken Saudi Arabia’s air war against Yemen. “That’s the clearest message we can send,” he said.

Corey defended President Trump’s relations with North Korea. “The president is on the right track with this,” he said of Trump’s talks with North Korean leader Kim Jong-un, noting that Trump has ceased missile tests over neighboring Japan.

Murphy countered that “Kim has negotiated circles around the president” and that while the U.S. has canceled military exercises, North Korea has made “almost no concessions” with its nuclear program.

The two candidates also took opposing positions on the Trump administration’s nominations to the nation’s highest court, and on how members of Congress have vetted those nominees.

When asked about his opposition to Kavanaugh and 2017 Trump nominee Neil Gorsuch, as well as his potential opposition to future Trump nominations to the Supreme Court — Murphy replied, “If they don’t support Connecticut values, I’m not going to support them.”

Corey called the Kavanaugh confirmation hearings “an embarrassment to the country” and a process designed to embarrass the nominee and his family. “The whole process should have been a lot easier.”

When asked by debate moderator Dennis House whether he believes Christine Blasey Ford’s charge that Kavanaugh sexually assaulted her when they were teenagers in 1982, Corey said “I believe she was sexually assaulted but there was no evidence” to corroborate her claim against Kavanaugh.