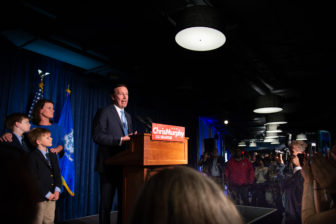 Senator Chris Murphy speaks after winning re-election for his second term in the U.S. Senate.

Voters returned U.S. Sen. Chris Murphy to the Senate and re-elected Connecticut’s Democratic members of the U.S. House — representatives who will serve in a chamber controlled by their own party for the first time in eight years.

Connecticut’s congressional delegation will also have a newcomer in the next Congress.

Most will rise to positions of leadership in the new Congress now that Democrats have seized control of the U.S. House from the GOP.

“Everything has changed. Everything,” DeLauro said. “Democrats have won control of the House. It is only unknown on what scale.”

Democrats picked up the 23 House seats they needed to win the majority by about 11:00 p m. and were on track to win more than 35 additional seats when all the ballots were counted.

While official results were not in, Larson, a heavy favorite, was declared the winner against Republican Jennifer Nye.

“The people of the First Congressional District have spoken, and I’m honored and humbled that they have entrusted me again with the responsibility of representing them,” Larson said.”The people of the nation have spoken as well, and for the first time in eight years, we are back in the majority and in control of the House of Representatives.”

“I’m very honored again to have the confidence of Connecticut’s 2nd District voters,” Courtney said. “It’s a district that does not select it’s representatives lightly. People watch very closely how a member handles his or her duties.”

Democrats tcampaigned to make the election a referendum on President Donald Trump.

“I believe that we are fighting for the soul of our country,” DeLauro said in her speech to supporters. “Republicans took control, divided the country, and used that to cut corrupt deals to enrich their billionaire donors at the expense of the middle class.”

DeLauro, who has represented a New Haven-based district since 1999, also said she regretted “this is my first election night without my mother” Luisa DeLauro who was the longest serving alderman in the city’s history.

Democratic control of the U.S. House means that for the first time since Trump was elected president, there will be a check in Congress on the president’s actions. The Democrats’ victory also means there will be new investigations into the Trump administration.

Courtney said the Democratic victories in the U.S. House were a rebuke of Trump policies.

“Hopefully the president will take a hint and change his approach to governing,” Courtney said.

Democrats, however,  failed to take over the Senate, which the GOP held by a slim 51-49 majority — a margin which seemed likely to grow by at least two seats in the election. While there were a number of competitive Senate races this year, Murphy’s was not one of them.

Murphy campaigned on his record in the Senate, which included approval of a mental health bill and legislation aimed at bolstering reporting of information to a database the FBI uses to screen gun buyers.

The senator largely ignored Corey, focusing his attacks on  Trump instead.

Corey, meanwhile, ran as a Trump loyalist and on his working-class background and experience as a business owner.

Addressing the crowd at Dunkin Donuts Park in Hartford, Murphy  described his victory in terms of Connecticut’s repudiation of the Trump administration.

“We knew two years ago to this day that we were in for a rough ride,” Murphy said, adding that Trump’s election set America on course for “a moral reckoning. … The election of Donald Trump created this deep void inside of us that we’ve been trying to fill for the last two years.”

Exit polls showed that Trump and health care were the prime issues that concerned those who went to the polls on Tuesday, followed by the economy and immigration, which the president sought to amplify with a last-minute promise to crack down on migrants, including those traveling in “caravans” from Central America.

While Democrats failed to take the Senate in the contentious midterm, they won a number of governors’ seats, including ones in Colorado and Kansas. But late into election night, Connecticut’s hotly contested gubernatorial race between Democrat Ned Lamont and Republican Bob Stefanowski was undecided.