Despite gains, Democrats may need GOP help to pass next CT budget 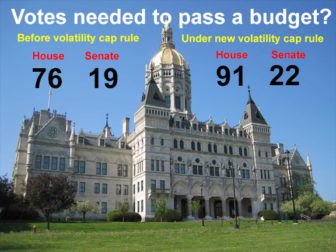 If the new legislature wants to use $650 million held in a special reserve to mitigate a big budget deficit, 60 percent of the House and Senate must agree.

Despite their biggest gains in a decade, majority Democrats in the General Assembly have almost no margin for error if they hope to solve Connecticut’s next budget crisis without Republican votes.

How can this be when Democrats outnumber the GOP by 33 votes in the House and by 12 in the Senate, based on unofficial election results?

The answer rests with a multi-billion-dollar budget deficit and a little known rule, called the volatility cap, that is designed to force the state to save more money.

More specifically, it would take 60 percent – and not a simple majority – of the new legislature to tap hundreds of millions of dollars stashed away this year that could play a crucial role in solving a $4.4 billion problem.

On paper, all it takes to adopt a state budget in the 151-member House is 76 votes, a simple majority. The same is true in the Senate, where 19 out of 36 votes are necessary.

According to Senate President Pro Tem Martin M. Looney, D-New Haven, the Senate — which currently is split 18-18 — now breaks down 24-12 to the Democrats’ advantage.

If all that’s needed to balance the budget is a simple majority, Democrats could sustain defections in both chambers and still craft the next state spending plan by themselves.

But there’s this small hitch — the deficit.

According to the legislature’s nonpartisan Office of Fiscal Analysis, state finances — unless adjusted — will run 10.5 percent or $2 billion in deficit in the first new fiscal year after the election.

By the second year of the next biennium, the potential gap hits 12 percent or $2.4 billion.

Traditionally, the first place legislatures have turned when facing multi-billion-dollar shortfalls is the emergency reserve, commonly known as the “rainy day fund” — provided it holds any money.

Connecticut currently has $1.2 billion socked away. And while Gov.-elect Ned Lamont has said he doesn’t plan to tap those funds, lawmakers from both parties have said privately the new governor has almost no chance of keeping the legislature from tapping those funds.

Comptroller Kevin P. Lembo is projecting the current budget will close with a $170 million surplus, and that also could be used to mitigate the impending deficit.

But even if a $4.4 billion, two-year deficit is reduced to $3 billion by emptying the rainy day fund and this year’s surplus, that smaller potential gap — equal to roughly $1.5 billion per year — still is large enough to force major spending cuts, tax increases, or both.

There’s one more piggy bank legislators could break into, but that’s when the second variable — the new rule to promote savings — comes into play.

Legislators voted last November, by a large, bipartisan margin, to create what has become known as the “volatility cap.”

It requires the state to save, rather than spend, any income tax receipts from quarterly filings — which are derived chiefly from capital gains and other investment earnings — in excess of $3.1 billion per year.

This segment of the state tax stream tends to surge rapidly in good times and shrink drastically in bad times. The volatility cap is in place to stop the state from spending too much of these revenue surges on new programs — only to find the surge has vanished, and the program must go on without it, a year or two later.

Connecticut has another $648 million in this volatility cap piggy bank, but lawmakers cannot crack it open until the end of next September — three months after the fiscal year has ended — when Lembo’s office completes its audit of the 2018-19 fiscal year.

If this money could be applied to the deficit, the potential biennial shortfall would fall to $2.4 billion, or $1.2 billion per year.

That’s still high. But coming off an election season in which all gubernatorial candidates announced plans for major tax cuts, reducing the potential budget pain often is top priority.

And there is a loophole in the volatility cap rules that allows legislators to tap the funds early. This can be done only if:

If a few moderate or conservative Democrats don’t like a proposed budget, or if the party’s most liberal wing objects, then Democrats might need Republican votes to get a budget done.

Even without the volatility cap, neither party could assemble enough votes alone in 2017 to pass a budget that Gov. Dannel P. Malloy would sign. It took a nine-month debate before the two parties settled on a budget compromise last year.

Democratic legislative leaders opted Wednesday not too look too far ahead. But both Aresimowicz and Looney said the prospect of another bipartisan budget debate was real — but not necessarily scary.

“When you close your mind to other people’s ideas,  you’re doing the entire state a disservice,” Aresimowicz said. “ … We know that acting together, taking the “D” for Democrat off and the “R” for Republican, we get better results,” Aresimowicz said

“It’s too soon to say how this might work out,” Looney said. “That is an issue we’ll have to look at.”

When asked two days before the election about the prospect of needing another bipartisan compromise to solve the impending deficit, the top Republicans in the legislature said, if necessary, it certainly could be done.

“We can always do a bipartisan budget,” Senate Republican leader Len Fasano of North Haven said. “Look at what we did” in 2017. “We could certainly do it again.”

“I think you always have to be open to compromise,” said House Minority Leader Themis Klarides, R-Derby. “Everyone has to put out their own vision for the budget, but then we certainly could try to work together.”