Republican State Sen. George Logan is the apparent winner in the 17th state Senate District after a district-wide ballot recount. 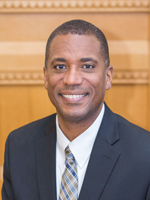 Logan, a Republican from Ansonia, defeated Democratic challenger Jorge Cabrera of Hamden. The outcome nevertheless leaves Democrats with a 23-13 seat advantage after the November 6 elections — breaking the Senate’s previous 18-18 tie.

Chuck Pyne, Logan’s campaign manager, said the lawmaker won by 85 votes, but according to data from the Connecticut Secretary of the State’s office, Logan won the recount by 18,524 to 18,447 — a plurality of 77 votes. The victory prevents the Democrats from having a veto-proof majority, Republicans said.

Sarah Locke of Cabrera’s campaign did not immediately respond to a request for comment.

Logan had appeared to lose in results tabulated last week, but amended results later showed him winning by 65 votes. Pyne said a math error was responsible for the shift in leads last week.

Another ballot recount is underway for the House’s 120th district seat between incumbent Democrat Rep. Phil Young and Republican challenger Jim Feehan. There will also be an upcoming recount in the 64th district in the contest between Rep. Brian Ohler, R-Canaan, and Democratic challenger Maria Horn.