A recent district-wide ballot recount for the 33rd state Senate District ended on Monday with a win by Democrat Norm Needleman, according to Senate Democrats. 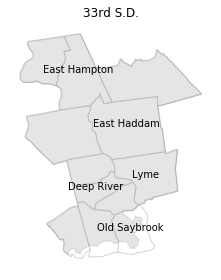 The race leaves Democrats with a 23-13 seat advantage after the November 6 elections—breaking the Senate’s previous 18-18 tie.

The final tally came after Secretary of the State Denise Merrill’s office said last week a recent correction to a reporting error in Essex put the contest within a margin that requires a recount.

John Heiser of the Essex Registrar of Voters said last week they submitted the wrong totals to the Secretary of the State’s office on election night. Initial returns reported to the secretary of the state showed Needleman outpolling Ziobron by 303 votes.

In another recount, for the 64th district, Democrat Maria Horn beat Republican incumbent Brian Ohler. That district includes most of Torrington, the southern part of Goshen, and the towns of Canaan, Cornwall, Kent, Norfolk, North Canaan, Sharon, and Salisbury.

Those ballot recounts leave Democrats with a 92-59 seat advantage in the House.