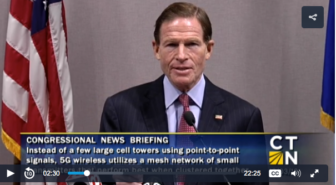 U.S. Sen. Richard Blumenthal speaking during a press conference about 5G wireless technology at the Legislative Office Building in Hartford on Monday.

Washington – U.S. Sen. Richard Blumenthal is leading a campaign to determine whether new “5G” wireless technology is safe and is asking the federal government for proof the cutting edge radiofrequency does not pose health risks – including cancer.

On Monday, Blumenthal, D-Conn., a member of the Senate Commerce Committee, and Rep. Anna Eshoo, D-Calif., wrote to Federal Communications Commission Brendan Carr seeking information on how his agency has determined 5G technology is safe.

“We need to know whether the radio frequencies can cause cancer,” Blumenthal said at a press conference in Hartford on Monday.

The FCC did not have an immediate response to the letter.

Blumenthal said 5G technology “is a vast improvement” over the 2G and 3G radio waves that allow wireless devices like cell phones and computers to operate.  He said the new technology “offers the tremendous promise of higher speeds and reliability.

“But there is also a peril of health hazards associated with radiofrequency that is higher and requires more transmitters and antennas,” he said.

The issue of whether 5G technology is safe was raised by Paul TenHaken, the mayor of Sioux Falls, S.D., at a Commerce Committee field hearing last month.

At that hearing, TenHaken asked Carr for “clear direction” and studies that show 5G towers, which would be placed near schools, libraries and homes, would not pose a risk to his constituents.

“Both at the FCC and other expert health agencies in Washington, they stay very much up to speed on these issues and have reached the determination that these are safe,” Carr told TenHaken.

Blumenthal wants proof. In his letter to Carr, the senator said “most of our current regulations regarding radiofrequency safety were adopted in 1996 and have not yet been updated for next generation equipment and devices.”

Blumenthal also cited a study released this month by the  National Toxicology Program, an  inter-agency program within the U.S. Department of Health and Human Service, that showed evidence of cancerous heart tumors, as well as some evidence of cancerous brain tumors, in male rats exposed to exposed to high levels of radiofrequency radiation like that used in 2G and 3G cell phones.

“The stark, simple fact is that health hazards are unknown and unstudied,” Blumenthal said at his press conference. “That is a sign of neglect and disregard at the Federal Communications Commission that is unacceptable. We need to know whether the technology can cause cancer and other diseases.

Communications workers and environmentalists are also concerned about the impacts of 5G technology.

David Weidlich, head of the Connecticut local of the Communication Workers of America, said the AT&T workers he represents have radiofrequency monitors when they work at the cell towers. However, Weidlich said at the Hartford press conference, the microtowers that would be used to transmit 5G frequencies would be installed on individual telephone poles where “there is no consistent safety mechanisms.”

Blumenthal and Eshoo gave Carr a Dec. 17 deadline to comply with their request for information.