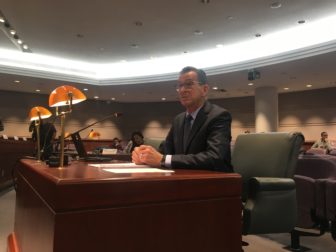 State leaders and advocates praised Gov. Dannel P. Malloy for his reforms of Connecticut’s criminal justice system on Wednesday as the working group charged with recommending ways to improve housing re-entry for former inmates met for its last time.

State Rep. Brandon McGee, D-Hartford, lauded Malloy for spearheading efforts to reduce Connecticut’s prison population and enacting his “Second Chance Society” bill, which eliminates prison as a punishment for many drug possession crimes and streamlines the process for obtaining paroles and pardons.

“More than 5,000 people were supervised by parole in 2017,” McGee said. “We thank you, Dan Malloy. We appreciate you, and I don’t think we give you your accolades that you deserve. We thank you for your policies.”

Malloy told the Reentry and Housing Working Group that decriminalizing marijuana alone led to 8,000 fewer arrests per year, giving prosecutors and other community providers the chance to focus on other issues.

The governor said the state has more to do—including his long-held conviction that Connecticut should expand the jurisdiction of juvenile courts to include offenders age 18 to 20.

Malloy said he was the first governor to bring that measure up on a national level and has since inspired other states, like Vermont, Illinois, and Massachusetts to consider it.

“Which is an interesting phenomenon for me, a guy who brought that up on a national basis, that I’ve been unable to convince our citizenry or their representatives here to take that step,” Malloy said. “That doesn’t mean that every crime has to be treated that way, but we need to recognize that people are not mature.”

The working group, which is set to submit a report of recommendations to the General Assembly at the end of this month, later heard Yale Law School students present proposals to change the state’s Section 8 and Rental Assistance Program (RAP) regulations and  eliminate some housing hurdles for the reentry population.

“We believe that by creating a more welcoming environment for reentry populations, people with criminal records will have opportunities to find stable homes where they can rebuild their lives, making Connecticut a leading second chance society,” Siso said. 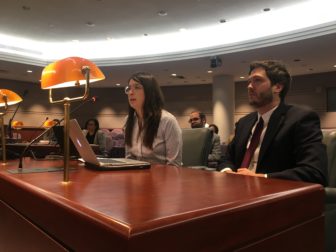 Yale Law School students Samuel Breidbart, Max Reinhardt, and Laura-Lynn Sandoual proposed a “clean slate” legislative measure that would seal records for all misdemeanors and some felonies after a set period of time to landlords and employers (but not law enforcement), and another “ban the box” bill that would prevent landlords from having initial access to an applicant’s criminal history and mandate their discretion to deny applications.

John Souza, a landlord and the president of the Connecticut Coalition of Property Owners, said he is concerned these proposals would leave landlords vulnerable to lawsuits but would like to be part of the process in crafting any further proposals.

“Both models, we believe, can be extremely effective in helping the reentry population and both models can attract broad bipartisan support,” Breidbart said.