As Trump faces heat, he lashes out at Blumenthal 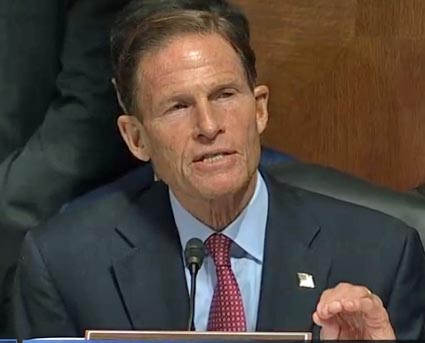 Washington – As one of the toughest critics of the president, Sen. Richard Blumenthal  had drawn more fire from Donald Trump than almost anyone in Congress.

Political analysts say there’s good reason for the enmity – and that it’s not likely to end.

Blumenthal ratcheted up his criticisms of the president over the weekend in a series of television appearances and tweets as Trump faced mounting pressure from investigations into Russian involvement in his 2016 campaign, and as subpoenas are being prepared for Trump’s businesses in a lawsuit alleging the president is in violation of the U.S. Constitution’s emoluments clauses.

“A lot of facts are coming out, a lot of pieces of the puzzle,” Blumenthal said.

Trump says the memos prove there’s no collusion between his 2016 presidential campaign and the Russians. The president’s allies have dismissed the allegations of illegal campaign finance contributions as no more than chump change.

But in an appearance on MSNBC over the weekend, Blumenthal said Trump’s payments during the campaign to silence Stormy Daniels and Karen McDougal, two women who claim to have had affairs with the president, made the president “an unindicted co-conspirator” in a crime.

That set Trump off. 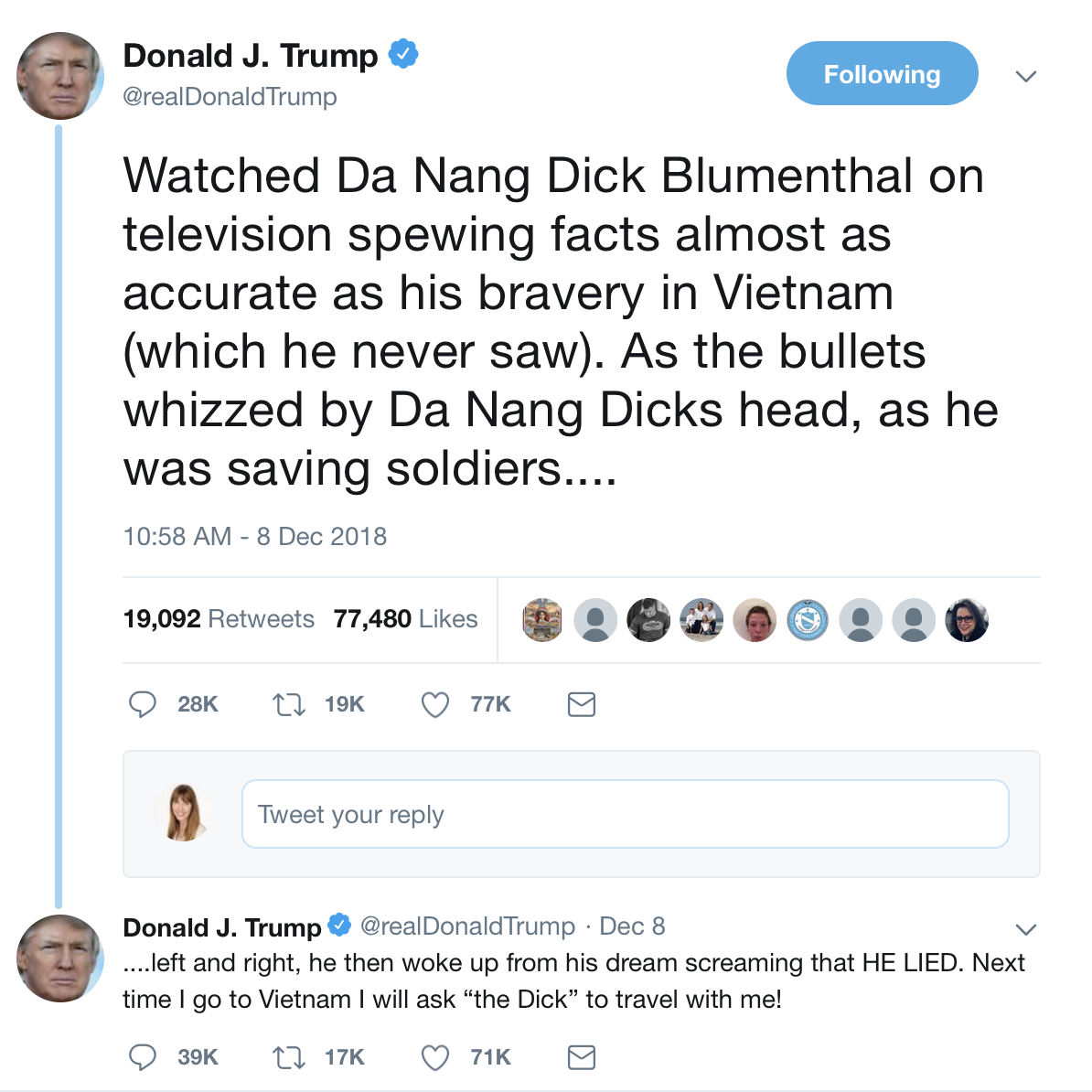 The president’s tweet about Blumenthal, posted at 11 a.m. on Saturday, returns to familiar themes.

“Watched Da Nang Dick Blumenthal on television spewing facts almost as accurate as his bravery in Vietnam (which he never saw),” Trump tweeted. “As the bullets whizzed by Da Nang Dicks head, as he was saving soldiers…left and right, he then woke up from his dream screaming that HE LIED. Next time I go to Vietnam I will ask “the Dick” to travel with me!”

Blumenthal was a member of the Marine Corps Reserve during the war, but remained stateside. He said he misspoke when he said during his 2009 campaign for U.S. Senate that he had served in the Vietnam War and apologized.

Trump has attacked Blumenthal for those statements more than half a dozen times, frequently when the president is under pressure.

“When Trump sees him on television, it triggers him,” said Norm Ornstein, a resident scholar at the conservative American Enterprise Institute. “He is always looking for a scapegoat, and because he has fixed in his head that Blumenthal dissembled about his military service—a wildly exaggerated interpretation …it becomes a frame for his venting.”

Blumenthal could have seen combat as a member of the Marine Corps Reserve. Trump, however, received five deferments from the draft. One was for bone spurs in his feet. The others were related to his education.

To Ross Baker, a professor of political science at Rutgers University, Trump’s attacks on Blumenthal stem from concern the Democratic senator may know what he’s talking about.

“He has somewhat more weight than most Democrats because of his legal background,” Ross said. “Trump knows (Blumenthal) is an experienced prosecutor.”

As far as attacking Blumenthal for his misstatements 10 years ago about his role during the Vietnam War, Ross said the president believes that’s the senator’s “Achille’s heel.”

“He senses a weak spot he can attack on and try to belittle” the person the president perceives as a threat, Baker said.

Blumenthal on Monday declined to discuss Trump’s latest taunts, “except to say ‘there he goes again.’”

He called the president’s tweets ludicrous and said they would not deter him from continuing to say Trump has broken the law.

On Monday, Maria Butina, a 30-year-old Russian gun rights activist who is accused of developing a covert influence operation in the United States, agreed to plead guilty to conspiracy and cooperate with federal and state authorities.

“The Butina plea potentially breaks open a new factual trail to determine: did NRA funnel illicit foreign money into the 2016 Trump campaign & beyond? Another bad day for Individual-1 & his inner circle,” Blumenthal tweeted.

In his sentencing memos, Mueller referred to Trump as “individual 1.”

“A lot of pieces of the puzzle are emerging,” Blumenthal said. “Butina is one example.”

In addition to the Mueller probe, the Trump campaign is under investigation by federal prosecutors from the Southern District of New York.

While Trump has the authority to fire Mueller, he can’t stop the separate, independent investigation by federal prosecutors in New York.

Then there’s the emolument’s lawsuits.

One, headed by Blumenthal, contends Trump is not complying with a Constitutional provision, known as the Foreign Emoluments Clause, that requires the president to seek permission from Congress before taking payments or gifts from foreign governments.

“It will elicit any dealings with the Russians, the Chinese…business in the Philippines, Saudi Arabia,” Blumenthal said.

The other emoluments lawsuit,  brought by the attorneys general of Maryland and the District of Columbia, focuses more narrowly on the Trump International Hotel and on whether the president has profited from both foreign and state government spending at the hotel.

Last month, a federal judge agreed that the lawsuit could go ahead, marking the first time an emoluments case has ever gone to trial in U.S. history.

Blumenthal said Trump is surrounded by three out-of-control “forest fires” — the Mueller investigation, the federal investigation in New York, and the emoluments lawsuits — that threaten to consume the president.

“They are coming from different directions to a single target,” he said.

As for Mueller’s investigation, Blumenthal said the special counsel still has “miles to go before he stops.”

While the probe won’t be wrapped up soon, Blumenthal said it’s likely Mueller will issue a final report by the end of 2019.