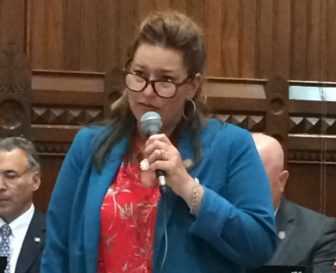 Ziobron, who has served as the top ranking House Republican on the Appropriations Committee for the past four years, succeeds Lisa Hammersley of Southington, who has accepted the position of deputy director with the Connecticut School Finance Project.

Ziobron has spent the past six years representing the 34th House District, which includes the towns of Colchester, East Haddam and East Hampton.

Opting not to seek re-election, Ziobron lost the race for the 33rd Senate District to Democrat Norm Needleman, an Essex businessman.

“We are very excited to welcome Melissa Ziobron to the Senate Republican Office where she will serve as budget director,” Fasano said, adding “she has demonstrated incredible work ethic and deep knowledge of the state’s finances. She knows the state budget inside and out and understands a budget is more than just numbers — every part of a budget impacts people.”

Fasano also praised Ziobron as being a “major force” behind the bipartisan agreement that ended a nine-month budget debate in 2017.

“As we look ahead to tackling bigger financial issues on the horizon, Melissa is the perfect candidate to assist our caucus in our efforts to move Connecticut in a new direction and bring confidence back to our state,” he said.

Hammersley, who was budget director for the caucus for the past eight years and previously served as a fiscal analyst in the state Office of Policy and Management, is recognized as one of the most knowledgeable fiscal policy experts in state government.

“Lisa is one of the most talented and hardworking people our caucus has ever had the privilege of working with,” Fasano said. Her work for the Senate Republican Office … has been phenomenal, developing budgets that reflect our efforts to protect funding for core services and avoid tax increases. … Lisa has changed the budget dynamics at the state Capitol like no one else for the betterment of Connecticut.”