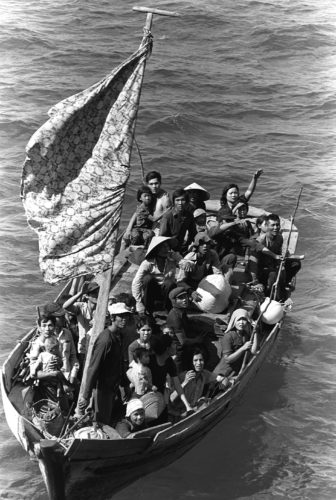 Historical photo of 35 Vietnamese refugees waiting to be taken aboard the amphibious command ship USS Blue Ridge. They were rescued from a 35 foot fishing boat 350 miles northeast of Cam Ranh Bay, Vietnam, after spending eight days at sea.

Washington – Trang left the poverty and repression of Vietnam for a new life in Connecticut in the late 1980s, but soon ran into trouble.

In his late teens, Trang fell in with the wrong group of youths and was arrested with several others for breaking into a home and burglarizing it.

He served time in prison, but straightened out his life after he was released. Now married and a father with a steady job in the Hartford area, Trang is very likely to be deported to a country he has largely forgotten because of a change in federal immigration policy.

Earlier this month, President Donald Trump’s administration pressured Vietnam to uphold a 2008 agreement and take back refugees like Trang who came to the United States before 1995.

But many Vietnamese who came to the United States before 1995, some of them fleeing the Vietnam War, have lived in a gray area as far as immigration law. If they had a criminal record, they could not attain legal status, but they could not be deported either.

Trang’s attorney, Alex Meyerovich of Bridgeport, said Vietnamese immigrants who ran afoul of the law and were deportable would be required to check in with immigration officials periodically. Meyerovich shared his client’s story with the CT Mirror on the condition he be identified only by his first name.

“There was an understanding that [Trang] would not be subject to physical removal,” Meyerovich said.

But now Trang is likely to be detained for deportation at his next check in, Meyerovich said.

“He’s going to take the brunt of the decision to change policy,” Meyerovich said. “And he’s a great guy who is not going to ever again get into trouble.”

Crimes that put Vietnamese residents at risk for deportation range from distribution of narcotics and sexual assault to possession of marijuana. More than 7,000 Vietnamese have become suddenly deportable under the new policy.

Immigration advocates argue that in some cases the convictions are for petty crimes, many the result of youthful indiscretions. Others, like Trang, who committed more serious offenses, have been rehabilitated and, over the decades, have become solid members of their U.S. communities.

“A lot of these people have no ties to their original country,” said Wayne Chapple, an immigration lawyer in Hartford.

There’s another concern, one that prompted the former United States ambassador to Vietnam, Ted Osius, to leave the Trump administration last year after he was suddenly reassigned.

“The administration wanted an ambassador appointed by Trump in place, rather than one who had opposed him on this issue of deportations,” Osius told the Huffington Post.

To Osius, the deportation effort is a broken promise to South Vietnamese families who had been allies of the United States during the war and would not be safe in Vietnam.

But to the Trump administration, the deportations are part of a larger plan to rid the nation of immigrants who have committed crimes.

Katie Waldman, spokeswoman for the Department of Homeland Security, said in a statement that “it’s a priority of this administration to remove criminal aliens to their home country.”

“In general, the effect of this has sown fear and distrust in the Vietnamese community,” said Michelle Ross, chair of the Connecticut chapter of the American Immigration Lawyers Association. “In essence the U.S. government has decided to change a policy that it has had for decades.

Vietnamese immigrants lean Republican when they vote. Two GOP lawmakers who have large Vietnamese populations in their states, Reps. Ed Royce of California and Michael McCaul of Texas, sent a letter to Secretary of State Mike Pompeo and Homeland Security Secretary Kirstjen Nielsen that said they were “deeply concerned by reports of a new Administration policy to deport certain Vietnamese-Americans who have lived in the United States for longer than 23 years.”

A ‘virtual wall’ against immigrants

According to the U.S. Census Bureau, there are only about 11,000 Vietnamese living in Connecticut.

But the move to deport some of them shows how committed the Trump administration is to creating a “virtual” wall against immigrants, both legal and illegal, as the president fights to build a real wall along the U.S.-Mexico border,  immigrant activists say.

Besides roundups and deportations of those who have entered the country illegally, the Trump administration has slowed or halted many seeking to come to the United States for a job offer or through a relationship to a citizen.

The Trump administration has also made it more difficult for refugees or asylum seekers to gain entry to the United States.

The year is ending with the administration saying those seeking asylum would be forced to wait in Mexico and could not press a claim unless they show up at a port of entry.

That means those who entered the country illegally could not apply for asylum, a reaction to recent caravans of migrants from Central America.

But last Friday, the U.S. Supreme Court upheld a lower court ruling that determined federal law does not allow the president to make such changes.

“We are thrilled to hear that the Supreme Court has prevented the Trump administration from unilaterally re-writing the nation’s immigration laws by restricting the places where migrants could ask for asylum,” said Juan Hernandez, vice president of 32BJ of the Service Employees International Union in Connecticut. “This attempt to re-write our nation’s asylum policies is one more sign of the extreme lengths that this administration is going to persecute all immigrants.”

Those who seek to restrict immigration to the U.S. say the current asylum process allows for “frivolous” claims and for tens of thousands of immigrants who should be immediately deported to stay in the country for months and years while their cases are adjudicated. Many of these people, they say, don’t show up for hearings at immigration courts and remain in the country as undocumented aliens.

“Since there are sometimes too many asylum applicants to detain, they can be released to await a hearing on their claim,” the Federation for American Immigration Reform said in a statement. “Having obtained their freedom, these asylum applicants often fail to show up for their hearings and simply disappear into society.”