Access Health sees decline in black and Hispanic customer base 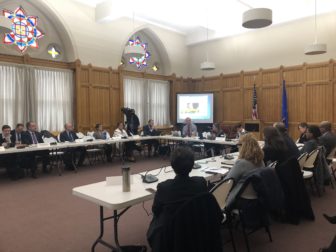 Members of the state’s Health Care Cabinet meet on Tuesday.

With just one week left in open enrollment, Access Health CT has seen overall high levels of customer engagement and turnout, but a decline in its black and Hispanic base, a health insurance exchange official told Connecticut policymakers Tuesday.

Connecticut’s Affordable Care Act marketplace expanded its enrollment period for people seeking coverage in 2019 to Jan. 15. Those who missed the Dec. 15 deadline won’t have coverage under a new policy until Feb. 1.

An update on the health insurance exchange’s open enrollment period came during a meeting of the advisory group, which provides guidance to the governor and lieutenant governor on health care reform.

“It’s actually a tremendous enrollment year given everything that’s been going on in the context of the Affordable Care Act,” said Office of Health Strategy Executive Director Victoria Veltri. “To retain this number of enrollees is a very, very big accomplishment.”

Blundo said officials extended the deadline by an additional 30 days to “allow our customers to have a little more time to evaluate their plan options,” and they expect to see a small bump in registration once open enrollment closes.

The health insurance exchange has counted more than 300,000 website users during the open enrollment period, while more than 25,000 customers have used the new live chat feature on the website. Blundo said 1,600 of those customers who reenrolled have changed their plans since Dec. 16.

“The change in requirements for plan designs this year created some pretty significant price changes across plans, so as a result we’ve seen quite a bit of product selection and product change with our customer base,” Blundo said. “Forty-one percent of the population reenrolling changed their plan for 2019 in comparison to last year [when] only 18 percent of those [who reenrolled] actually changed their plan.”

Blundo said the black customer base made up 6.9 percent of the health care exchange’s population last year compared to 6.6 this year, and the Hispanic customer base went from 14.9 percent to 14.78 percent.

Patricia Baker, president and CEO of the Connecticut Health Foundation, said looking at the breakdowns in enrollment by demographics and trend lines will be important in evaluating the decline in enrollment among blacks and Hispanics.

Access Health CT CEO James Michel said officials at the health care exchange will work on developing a strategy to combat these declines.

“We need to find out why they are going down and more importantly what do we do about it,” Michel said.