Lawmakers consider bill to permit marijuana use for opioid withdrawal 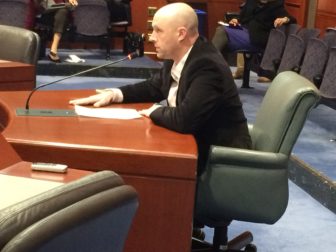 Brian Essenter, a medical marijuana counselor, testified in favor of the bill Monday.

Speaking in favor of the use of marijuana for opioid withdrawal, Brian Essenter, a medical marijuana consultant, told legislators Monday that he has seen first hand “the death grip” that opiates have on those who are addicted.

“Getting clean is a very long, lonely and harsh journey,” Essenter said. ” … No one has ever died due to an overdose of cannabis.”

Essenter, who is a pharmacist and the former manager of a medical marijuana dispensary in Bethel, said that patients withdrawing from opiates have pain, anxiety, nausea and other symptoms that cannabis has been shown to help.

While cannabis is not for everyone, Essenter said, it can be another “tool for clinicians to have in their tool box.”

Members of the legislature’s Public Health Committee heard testimony during a public hearing Monday from those for and against Sen. President Pro Tem Martin Looney’s proposed bill to add opioid use disorder and withdrawal as conditions that qualify for the palliative use of marijuana.

The state’s Medical Marijuana Program Board of Physicians considered adding the opioid withdrawal and use disorder to the qualifying conditions in 2018 but decided against it.

William T. Zempsky, the head of the division of pain and palliative medicine at Connecticut Children’s Medical Center and a member of the Medical Marijuana Program Board of Physicians, spoke against the bill, noting that the board turned it down because “there is no medical evidence for the use of cannabis for treatment of opioid use disorder and withdrawal.”

“It would be extremely disappointing if the legislature ignored the advice of the Board of Physicians, which they formed, and allowed the legislation to be passed,” Zempsky said. “It would be a dangerous precedent” and would put “patients at risk for treatment with an unsubstantiated drug without the appropriate expertise and support.”

Zempsky said, however, that if evidence becomes available to support cannabis use for opioid use disorder, the board would reconsider its recommendations.

Rep. Jonathan Steinberg, a Democrat from Westport and co-chairman of the committee, noted that legislators’ intent “is to relieve the crisis that we have with regard to opioids” and asked Zempsky if he thought it would be a “worthwhile endeavor” to engage in research on the use of marijuana for opioid use disorder.

Zempsky said that would be “very appropriate.”

“When you do things not supported by evidence, you run a strong risk of having unintended consequences and actually worsening the care of the patient group you are intending to help,” Zempsky said. 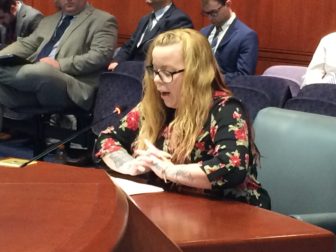 Christina E. Capitan, a patient liaison for Prime Wellness of Connecticut, spoke in favor of permitting the use of marijuana for opioid withdrawal.

Legislators also heard from Christina E. Capitan, a patient liaison with Prime Wellness of Connecticut, one of the medical marijuana dispensaries in the state.

Capitan told lawmakers that she has seen several patients greatly reduce or cease all use of opiate pain killers, such as Oxycodone and Methadone, when taking medical marijuana. She said she’s also seen it help patients stop the use of illicit opioids like heroin.

The committee also heard testimony Monday on a bill introduced by Sen. Gary Winfield, D-New Haven, that would prohibit an unauthorized pelvic exam on a woman who is under deep sedation or anesthesia without the woman’s prior consent to the examination.

The interest in the proposal was prompted by reports in the media last year that doctors-in-training and medical students were sometimes allowed, for educational purposes, to perform pelvic exams on women who were under sedation and had not been  provided informed consent.

Dr. Daisy Leon-Martinez, the chief resident at Yale New Haven Hospital, spoke against the proposal, representing the positions of the American Congress of Obstetricians and Gynecologists and the Connecticut State Medical Society.

Leon-Martinez said the bill isn’t necessary because pelvic exams are never given for educational purposes at Yale New Haven Hospital without a woman’s informed consent.

“We all say that pelvic exams that are for the purpose of education have to be consented to prior to the patient undergoing any form of sedation or anesthesia,” Leon-Martinez said.

Sen. Mary Daugherty-Abrams, D-Meriden and co-chairwoman of the public health committee, asked Leon-Martinez why it would be “a negative to codify something that you’re already doing?”

“Once we start singling out particular parts of our practice as needing to have legislation tied to it,” Leon-Martinez responded, “it begins to take autonomy away from our ability to take care of our patients.”

Lucy Nolan, director of policy and public relations with the Connecticut Alliance to End Sexual Violence, was strongly in favor of the legislation, saying that the practice of giving such exams without informed consent is “very outdated, very outmoded, particularly in these #MeToo moments.”

“They may not do it at Yale New Haven, but many places, we don’t know if they are doing it because these women are under deep sedation,” Nolan said. “I think it’s disrespectful of women because it arrogantly assumes that the medical profession’s needs are more important than the needs of women and of female patients.”