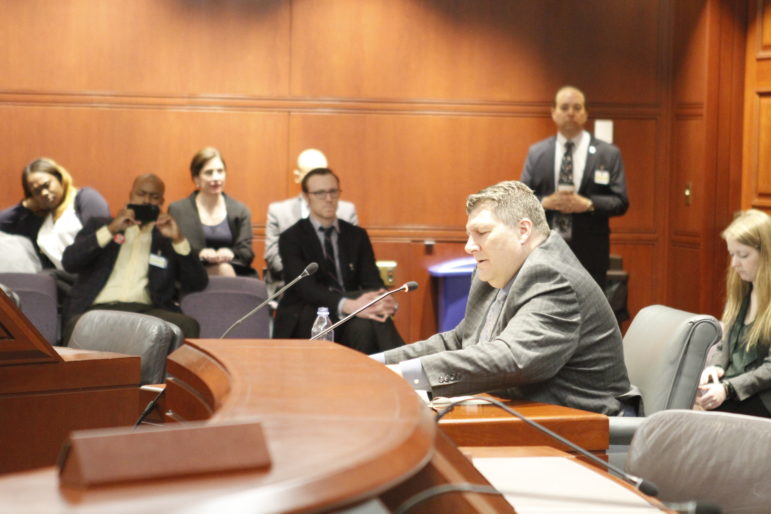 Gov. Ned Lamont’s prison chief nominee Rollin Cook was  grilled during a wide spanning confirmation hearing with lawmakers Thursday about a recently circulated email that contained critical information regarding his tenure as head of Utah’s department of correction.

Questions about prison deaths under his watch in Utah and that department’s failure to disclose nearly 1,500 pages of medical records demanded by a judge came after Cook told lawmakers his focus, throughout his career, has been on evidence-based treatment for offenders that has allowed the corrections system to evolve and improve.

“I am honored to have the opportunity to serve the citizens of Connecticut and to continue to build upon the tremendous accomplishments within criminal justice and corrections that occurred over the past decade,” Cook told members of the legislature’s Executive and Legislative Nominations Committee, who confirmed his appointment.

Cook stepped down this year after five years as executive director of the Utah Department of Corrections, where he oversaw a system with 2,200 employees and more than 7,000 inmates in five community correction centers and state correctional facilities.

Lamont announced his appointment of Cook as the state’s correction commissioner in December, after selling him on the job in a series of telephone interviews. Cook accepted the job without a face-to-face meeting with Lamont or a trip to Connecticut, a state he had never visited.

The governor’s nominee has been touted as a national expert in the field of criminal justice and is expected to build off of the prison reforms instituted by former prisons commissioner Scott Semple. Those efforts included repurposing one men’s prison as a community reintegration center and forming special therapeutic units for inmates age 25 and younger.

An email generated this week by Connecticut attorneys DeVaughn Ward and Ken Krayeske, who hired a consulting firm to distribute it to lawmakers, however, attempted to cast doubt about Cook’s reputation as a reformer by including links to a series of critical news stories related to his time in Utah.

Senate Minority Leader Len Fasano, R-North Haven, who went over nearly all of the issues raised in the email, asked Cook to explain why the 1,500 records requested in a Utah death penalty case were not turned over to the defendant’s lawyers.

Cook said a department employee responsible for records retention thought there were certain records she could not disclose in complying with the Health Insurance Portability and Accountability Act (HIPPA) privacy laws. After a judge took the department to task for its failure to disclose the records, Cook said, his staff moved to update certain policies and address lapses in training among records workers, while also ensuring supervisors and managers reviewed future requests to meet standards.

When asked by Fasano about 15 illness-related inmate deaths among a string of 20 in 2017, Cook said a high volume of sex offenders with long sentences has resulted in a lot of geriatric inmates dealing with health issues related to old age, cancer and heart disease. Among the other deaths were two suicides, two involving alcohol overdoses, and one unknown case.

These answers seemed to satisfy Fasano, who later recalled positive statements made about Cook by the ACLU and the Utah Prisoner Advocate Network when he stepped down, noting “and that’s when you were leaving, that’s when most people would take shots at you, when they know that you’re done.”

“So with respect to this email that’s been circulated around and the handout—you can take anything out of context in this building and make it look bad,” Fasano said. “And I’m glad you had the opportunity to talk about it, and I’m going to be very proud to stand up and support your position as the commissioner of DOC.”

Lawmakers also asked Cook to comment on how he plans to handle issues related to inmate health care in Connecticut, which have trailed the department since it assumed management of those services from the University of Connecticut Health Center this past July.

Prior to that transfer, UConn Health’s Correction Managed Care (CMHC) had overseen these services for the state’s prison system since 1997.

That contract, which was worth $140 million in 2017, left lawmakers and civil rights groups with growing concerns and complaints about the quality of medical and mental health care being provided to inmates.

Numerous incidents, including an inmate giving birth in her prison cell last February, large budget cuts, lack of oversight, and troubling stories outlined in lawsuits, have fueled those concerns.

Cook said he plans to fill an empty chief medical officer position in the next few weeks, and would like to hire a consultant to examine the best model for needed changes in the department’s health care system. He also said the department needs to fill approximately 90 additional health care positions.

Department of Correction health care workers in the SEIU 1199 New England have repeatedly called on state leaders and the department to fill more than 100 vacancies they say are undermining the quality of inmate care and causing untenable overtime hours among limited staff.

“This is the only population that is guaranteed by the constitution to have that care, so it has to be of my highest priority to make sure that that’s taken care of,” Cook said.