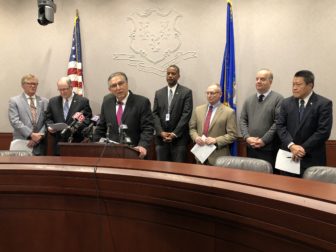 One measure would create those partnerships for the delivery of human services to low-income residents, elderly individuals, or people with disabilities, and form fraud investigations to detect those wrongfully using public assistance.

“It’s going to do more with less at a time when we have less resources and growing demand,” Kelly said.

Two other proposals would involve forming a public-private partnership council with multiple state commissioners to contract the delivery of human services, and privatizing certain Department of Motor Vehicle services.

Maribel La Luz, director of communications for Gov. Ned Lamont, said in an email the governor supports a lot of these ideas.

“He looks forward to working collaboratively with the legislature to ensure what’s best for the people and businesses of Connecticut,” she said.

“I think that the fact that he has been thinking in that direction, I think is a universal change for this state for the better,” Fasano said.

Fasano described a new state income tax deduction for charitable contributions that would go into a “citizens in need” account within the state Department of Social Services’ budget.

The way it would work: a wealthy tax filer contributing $10,000 to help the state fight drug addiction could reduce his taxable income by $20,000. If that filer was paying the top marginal income tax rate of 6.99 percent, the deduction would save them almost $1,400 in tax payments.

Fasano also noted this hypothetical household could claim a charitable deduction on its federal income tax return as well.

“It is a trifecta of results with no downside,” he said.

GOP senators also are developing a plan to encourage major defense corporations to work with Connecticut-based subcontractors, such as engineering and architectural firms.

Those services, under the Republican proposal, would be exempt from sales taxation, and also would qualify big companies for research and development credits within the corporation tax.

Fasano said a fiscal note on the cost of these tax breaks hasn’t been calculated yet, but added the caucus is hopeful the proposal would stimulate enough economic activity — and corresponding growth in state tax receipts — to pay for itself.

The “Prioritize Progress” initiative relies heavily on dedicating a major share of the state’s borrowing capacity toward highway, rail and bridge work — even though it might necessitate lesser borrowing for municipal school construction, capital projects at state universities, and for other capital programs.

Former Gov. Dannel P. Malloy, a Democrat, had argued on several occasions that the GOP plan would not allocate sufficient resources to both ensure highway, bridge and rail safety — and to make vital, long-overdue transportation upgrades.

Among the projects Malloy said would fall into fiscal limbo under the Republican initiative were the completion of upgrades to the “mixmaster” junction of Interstate 84 and Route 8 in Waterbury, the replacement of the elevated section of I-84 in Hartford, and the widening of Interstate 95 in southwestern Connecticut.

“This is our way of saying which capital improvements are most in need,” Martin said. And while safety must be top priority, he added, legislators for too long have been unwilling to postpone other projects — municipal schools, new buildings on colleges campuses, or others — in tough fiscal times. “I guess hard decisions are going to have to be made.”

Sen. Alex Bergstein, D-Greenwich, said afterward she agrees with her Republican colleagues about the need for more public-private partnerships, adding that she proposed legislation to leverage private contributions for transportation infrastructure improvements.

“This infrastructure bank bill is a perfect opportunity for Republicans to support two of their stated goals: increased public-private partnerships, and an improved transportation system,” she said.