Measure would be first of its kind, they say 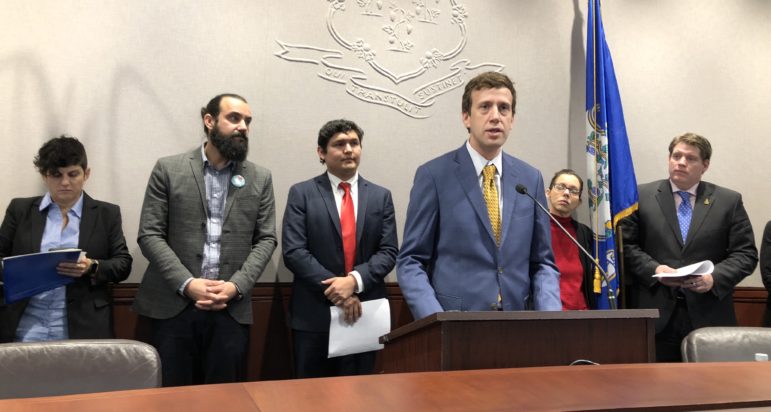 A Connecticut immigrant advocacy group on Thursday unveiled a measure that would allow residents without legal status to purchase private health insurance, a bill they say would be the first of its kind.

“We don’t have access to the preventative services we need to live healthy lives and can get access to quality and timely care if something does go wrong,” said Jonathan Gonzalez-Cruz, an organizer for Connecticut Students for a Dream.

Organizers for the youth-led statewide organization were joined by lawmakers and other local advocates at a press conference to outline the bill.

The measure would bar certain health carriers from refusing to deliver health insurance policies on the basis of someone’s immigration status.

State Sen. Matthew Lesser, D-Middletown, described the bill as common sense and noted those people still rely on services at hospitals despite their lack of coverage.

Lesser, who co-chairs the Insurance and Real Estate Committee, said the cost is shifted onto hospitals and all other state residents.

“As far as we can tell there are no obstacles in our state laws currently that would prohibit insurers from issuing polices to people without status in this state,” Lesser said.

Susan Halpin, the executive director of the Connecticut Association of Health Plans, said her team is examining the bill and taking a “wait and see approach.”

“Our number one priority is to make sure we would be in compliance with all state and federal law,” Halpin said.

Immigrants without legal status are not eligible for federal health insurance programs like the Affordable Care Act (ACA), the Children’s Health Insurance Program (CHIP), and Medicaid.

California, Illinois, Massachusetts, New York, Washington, Oregon, and the city of Washington D.C. have expanded their Medicaid programs to cover all income-eligible children regardless of their immigration status, according to the National Conference of State Legislatures.