Progressives to Lamont: 'You can’t simply be giving money to rich people.' 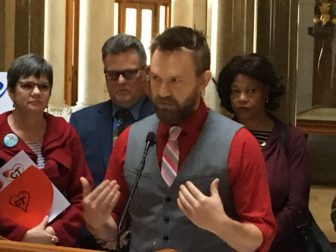 A major liberal block in the House of Representatives unveiled a series of tax proposals Thursday that could put them at odds with Gov. Ned Lamont and other of their fellow Democrats in the legislature.

House Democratic Progressive Caucus members favor raising income taxes on rich households, and staunchly oppose repeal of the estate tax. Democrats hold 90 out of 151 seats in the House and 44 of them are in the progressive caucus.

The caucus also expressed caution over Lamont’s plans to broaden the sales tax base and to dramatically curb state borrowing, saying these also could shift costs onto low- and middle-income households.

“We’re going to act as a block that says you can’t simply be giving money to rich people,” Rep. Josh Elliott, D-Hamden, a member of the caucus, said during a mid-day press conference at the Capitol.

The caucus is “committed to making sure that Connecticut is a bold leader” not only in economic justice, but on racial and other social issues, health care, voting rights and education, said Rep. Joshua Hall, D-Hartford, co-chairman of the caucus.

Lamont, whose first biennial budget proposal is due to lawmakers on Wednesday, said frequently on the campaign trail and since taking office that he is looking to broaden the sales tax base.

“There are many similar examples in our state’s current sales tax exemptions list and we need to streamline our system and ensure fundamental fairness,” Lamont wrote in a statement this week. “Next week, I plan to start a discussion with the legislature about how we can reform the sales tax without raising rates.”

While the sales tax generally is recognized as a regressive levy — people pay the same rate on most goods and services, regardless of their personal wealth — the income tax is not. 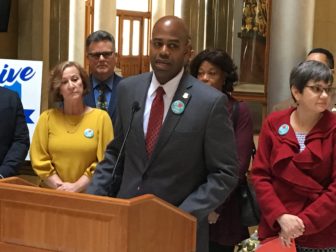 Connecticut imposes income tax rates ranging from 3 percent to 6.99 percent. That last rate is imposed on all earnings of individuals who make more than $500,000 annually and on couples that top $1 million.

Elliott said Connecticut could add as much as 2 percentage points to its top rate and remain competitive with New York and New Jersey — which max out at 8.82 percent and 8.97 percent, respectively.

The progressive caucus hasn’t reached consensus on whether to propose an income tax hike, or what new rate to support, Elliott said. But he added that members are concerned too much focus at the Capitol right now is on providing tax relief to the state’s wealthiest households.

“We are punishing the middle class in this state and we are letting people who are ultra-wealthy get by paying nearly half of the rate as everybody else.”

Elliott’s last statement was a reference to the 2014 tax incidence analysis prepared by the state Department of Revenue Services that found Connecticut’s state-and-local tax system, which is heavily reliant on a regressive property tax, hammers low- and middle-income households.

A “tax incidence” report studies which groups effectively pay taxes and how those burdens are shifted. For example, families and individuals that rent their housing effectively pay property taxes that their landlords build into the monthly rent.

The report found that the poorest households in Connecticut in terms of adjusted gross income — about 725,000 filers earning an average $48,000 per year — effectively spent 23.6 percent of that on state and local taxes in 2011.

By comparison, about 15,000 households earned in the range of $600,000 to $2 million, and effectively spent 7.7 percent of their income on state and local taxes.

Lamont, a Greenwich millionaire, has ruled out raising income or sales tax rates.

“The governor is interested in a robust debate inclusive of all perspectives on issues that impact Connecticut residents,” said Lamont spokeswoman Maribel La Luz. “He is looking forward to working collaboratively with the legislature to determine what is best for the state.”

Meanwhile, some Democratic legislators from Fairfield County have joined many Republicans in calling for repeal of the estate tax.

The tax raised almost $200 million this fiscal year and Elliott called it’s potential repeal “a huge transfer of wealth” to the rich.

“We’re saying … ‘We’ll make sure that it’s not expensive for your to live in our state, just please please please don’t leave,’” he added. “That’s not a way to run an economy. We need to be investing in ourselves.”

Elliott added that progressives also are wary of the governor’s proposal to place Connecticut on a “debt diet.”

Lamont would cap general obligation borrowing at $960 million per year. [G.O. bonds are the principal means used to finance capital projects and are repaid with resources from the budget’s general fund, which receives most tax and fee receipts.]

Between 2012 and 2019, the state issued an average of $1.59 billion annually in general obligation bonds. The majority of that money went toward education projects, either to build or renovate local schools or to construct dormitories, classrooms, research labs, and other facilities at the University of Connecticut, the state universities and the community colleges.

Updated at 4:25 p.m. with a statement from the governor’s spokeswoman.