Connecticut lawmakers are considering a handful of measures to strengthen voting rights for those involved in the criminal justice system and change the way the state counts inmates when crafting legislative districts.

Those bills span a wide spectrum and include legislation that would restore voting power to convicted felons who are on parole, no longer require those formerly incarcerated to pay all fines to regain electoral privileges, and grant voting rights to people currently serving prison time.

Connecticut is among 22 states where felons lose their voting rights during incarceration and for a period of time after they are released, according to the National Conference of State Legislatures. In Maine and Vermont, felons never lose their right to vote, even during their incarceration.

Lawmakers on the Government Administration and Elections Committee heard testimony Friday on several of the bills during a public hearing.

State Rep. Pat Dillon, D-New Haven, introduced a bill that would require the state to count inmates in their last town of residence rather than of the area where they are incarcerated.

Dillion told committee members state statute is clear that inmates are not considered residents of the towns where they are incarcerated, but they are counted there for the purposes of legislative redistricting.

Dillon said the principle “is whether or not an individual is fairly counted at the area they live and whether or not the towns where they are domiciled are fairly represented.”

In June, the NAACP sued Connecticut over the practice referred to as “prison gerrymandering” and argued it dilutes the voting power of urban communities.

The organization said the practice is unconstitutional because it violates the equal protection clause of the 14th Amendment and its “one person, one vote” principle.

NAACP General Counsel Brad Berry said in an email the organization is encouraged by the introduction of the bill.

State Sen. Rob Sampson, R-Wolcott, said inmates are represented by the lawmakers who represent the districts in which prisons are located. He  pressed Dillon on whether it was appropriate to count them based on their previous address and what action should be taken on those serving life sentences.

“The idea of using the last residence as an assumption that that’s what the person calls home, but they are in fact residing — eating, sleeping, spending their entire life — in the town they are counted in now,” Sampson said. “Who’s to say they would return back to that town that they once lived in?”

State Rep. Liz Linehan, D-Cheshire, said while she understood and agreed with the underlying intent of the bill, she strongly opposes it because if it changes census numbers “for other purposes it would have a significant negative impact on Cheshire’s state aid and operating budget.” Linehan’s town is home to the Cheshire Correctional Institution. 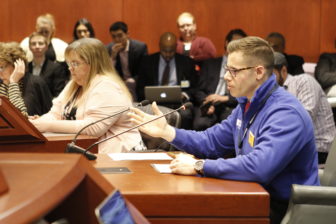 Gus Marks-Hamilton, a local field organizer with the American Civil Liberties Union’s Smart Justice Campaign, testified on a bill that would restore voting rights to convicted felons who are on parole.

Marks-Hamilton said the roughly 4,600 residents serving parole are living, working and paying local, state and federal taxes, but are disenfranchised from their constitutional right to vote.

“On a personal note, as someone who once lost the right to vote due to a period of incarceration, regaining my voting privileges when I was eligible and then the act of voting itself was a special and significant moment for me,” Marks-Hamilton said. “I felt more invested in and more connected to my community and to the state I was born and raised.”