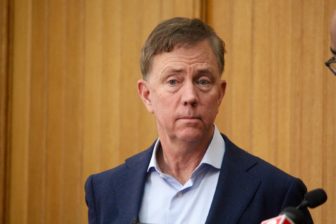 Gov. Ned Lamont’s first budget will include a series of new “sin tax” proposals, including levies on sugary drinks, electronic cigarettes and plastic bags, and deposits on alcoholic beverages.

Lamont, who must submit his first two-year budget proposal to the General Assembly on Wednesday, also will recommend raising the age, from 18 to 21, to purchase both cigarettes and e-cigarettes.

“State government is going to step up,” Lamont said during a taped appearance on Capitol Report, WTNH-TV8’s political affairs program, which airs on Sunday. “These are the sins of the 21st century.”

Lamont released limited details on these taxes and charges, but proposals include a 10-cent tax on plastic bags,  a 75 percent on e-cigarettes, a 25-cent deposit on liquor bottles, and a nickel deposit on 50 milliliter bottles of alcohol, sometimes referred to as “nip” bottles.

Lamont did not discuss the rates of the sugary drinks.

His predecessor, Gov. Dannel P. Malloy, proposed a 25-cent-deposit on full-sized liquor bottles in 2018, and his administration projected it would raise $13 million.

In 2017, the legislature’s Finance, Revenue and Bonding Committee considered, but did not approve, a one-cent-per ounce tax on sweetened beverages.

A spokesman for the governor’s budget office, Chris McClure, said the so-called sugar tax would advance an important health policy.

“We can leverage the tax code to accomplish valuable public health objectives, including incenting healthy behaviors and discouraging unhealthy ones,” McClure said. “This proposal is intended to encourage healthier food choices by our state’s residents, mitigate future health costs and, if enacted, would place Connecticut as the first state to do so.”

The sugar tax has been gaining support in recent years among health care and nutrition advocates as a tool to combat obesity and dental disease.

“The liquid sugar in soda, sports drinks, sweet teas, energy drinks and sweetened waters is the single largest source of added sugars in our diets today,” the Connecticut Association of School Based Health Centers testified before state lawmakers in 2017. “Children and adolescents are vulnerable to advertising for sweetened beverages and lack the information to make different choices.”

The association projected that the 2017 proposal, which levied a tax of one penny per ounce, would raise $145 million per year.

The Rudd Center on Food Policy and Obesity at the University of Connecticut also has advocated for the tax.

Roberta Friedman, a public health policy consultant who has worked with Rudd Center and the Connecticut Oral Health Initiative, testified that 19 percent of children in the state’s Head Start school readiness program already have experienced dental decay, a number that climbs to 29 percent by kindergarten and 40 percent by third grade.

In addition, about 9 percent of Connecticut adults — about 250,000 people — have been diagnosed with type 1 or 2 diabetes.

“These drinks contain nothing but empty nutrition-less calories and if drunk at all, should be a rare treat,” Friedman testified. “But instead, soda, sports drinks, energy drinks, sweet teas, and vitamin waters have become the daily go-to drinks in lieu of plain water.

The Rudd Center’s website offers a “Revenue Calculator for Sugary Drink Taxes” that offers a projection similar to that of the school-based centers.

According to the Rudd Center, a tax of one penny per ounce in 2019 would generate $150.9 million based on 117.9 million gallons sold. That estimate is based on an assumption of 90 percent compliance with the tax by distributors. The center warns that a non-compliance rate of 10 to 30 percent of beverage distributors would be “likely.

“We are concerned this new tax would harm our smaller, independent merchants who already operate under small margins,” Tim Phelan, president of the Connecticut Merchants Association, told legislators. “Any decline in sales would have a devastating effect on their bottom line and their ability to remain in business.”

Teamsters Local 1035, with 550 members who work in warehouse and production jobs for Pepsi, Coca-Cola and distribution firms, warned that a sugary drinks tax in Philadelphia triggered the loss of 80 to 100 related jobs in that city.

According to the American Beverage Association, the non-alcoholic beverage industry supports more than 2,600 jobs in Connecticut and has a $2.2 billion impact on the state’s economy.

The finance committee raised the sugary drinks tax bill for a hearing in 2017, but the bill died in committee without a vote.

This story was updated at 10:50 a.m. with details on e-cigarette and plastic bag taxes and liquor deposits.