Connecticut lawmakers split over Medicare for all

Courtney, Larson, DeLauro, Murphy have their own versions of a healthcare plan

Washington – While Sen. Bernie Sanders has made “Medicare for All” a major theme in his bid for the White House, Connecticut lawmakers are split over the idea.

Sen. Richard Blumenthal has endorsed Sanders’ latest “Medicare for All” proposal. But other Connecticut lawmakers are backing less sweeping change that would allow the state’s health insurers to stay in business, and maybe even expand their markets.

“This is a critical debate within the Democratic Party,” said Jared Bernstein, a senior fellow at the Center on Budget and Policy Priorities. “Whether to achieve universal coverage incrementally or whether to upend the current reality.”

Sanders’ plan would not only open Medicare — the federal health plan for those 65 and older—to all Americans, but reform the program to cover more services and eliminate most deductibles and co-payments.

It would also give the job of paying doctors and hospitals for claims and collecting money to run the program to the government, eliminating the role of private insurers in the nation’s health care system.

Rep. Jahana Hayes, D-5th District, has not endorsed Sander’s bill. But her spokesman, Jason Newton, says she supports the idea of Medicare for all, as a goal.

“Representative Hayes is working within the House Democratic caucus on a plan to get more people covered,” Newton said. “Those details have not been finalized.”

Medicare for All is a step too far for  Connecticut lawmakers who favor more incremental change, including lowering the age of eligibility for Medicare.

“From exorbitant premiums and deductibles to skimpy plans that do not cover the essentials, healthcare in America is complex and costly when you need it.”

For instance, Reps. Joe Courtney, D-2nd District, and John Larson, D-1st District, recently co-sponsored the “Medicare Buy-In and Health Care Stabilization Act,” which would allow those age 50-64 to buy into the program.

“A 60-year-old American could see a 40 percent savings in their premium,” Larson said. “This legislation would strengthen patient protections and put money back in people’s pockets.”

Rep. Rosa DeLauro, D-3rd District, is planning to reintroduce her “Medicare for America” bill. Under that buy-in legislation, individuals would pay a premium of no more than 9.69 percent of their monthly income for coverage.

When she introduced the bill last year, DeLauro said an alternative to the Affordable Care Act was needed because the ACA was under attack by the Republican Congress who were “working to dismantle health care coverage.”

“Healthcare affects the lives of every American, yet our current system fails far too many of them each day,” DeLauro said. “From exorbitant premiums and deductibles to skimpy plans that do not cover the essentials, healthcare in America is complex and costly when you need it.”

Sen. Chris Murphy, D-Conn., also introduced a Medicare buy-in plan last year. Under Murphy’s plan, people who qualified for Affordable Care Act subsidies could use them to purchase a new Medicare “Part E” plan. That Medicare component would use the same network of doctors and hospitals who now serve Medicare patients, but would include other non-elderly medical services, including pediatrics and maternity.

Murphy’s proposal would introduce a “public option” among the plans now sold by insurers in ACA exchanges like Access Health CT.

With the Senate under GOP control, Murphy’s plan did not advance.

But the notion of opening up Medicare to more Americans is gaining support among Democrats on Capitol Hill and among Americans. 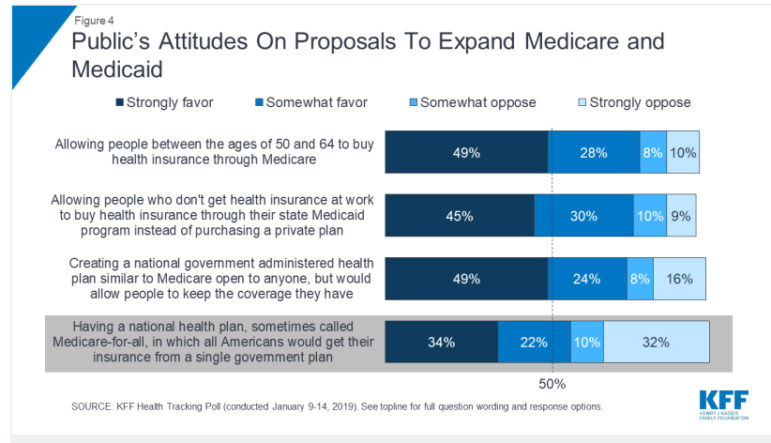 A chart from the Kaiser Family Foundation tracking poll report.

To many in GOP, it’s socialism

A recent survey by the Kaiser Family Foundation found that nearly six out of 10 people polled, or 56 percent, favored a national Medicare-for-all plan.

Yet incremental change was much more popular.

For example, Medicare buy in plans for adults between the ages of 50 and 64  like the one proposed by Larson and Courtney, were favored by 77 percent of the respondents.

In part that’s because about 180 million Americans receive coverage through an employer, and many are happy with their plans.

Bernstein of the Center for Budget and Policy Priorities supports the Democrats’ goal of universal health insurance coverage, but said “I don’t think you can hand wave away the private insurance industry.”

While many insurers, including Hartford-based Aetna, have expanded their markets by providing “Medicare Advantage” plans  — which are  offered by private companies that contract with Medicare —  not all health insurers have been successful at tapping into the market and the industry as a whole is squeamish about proposals that would expand Medicare.

But even Sanders’ “Medicare for All” proposal, co-sponsored by Sen. Kamala Harris, D-Calif., another White House hopeful, would not privatize hospitals, doctors or other medical providers. Britain’s National Health Service, meanwhile, is an example of a socialized system. Doctors there work for the government.

The United States does have a socialized health system — for military veterans. Veterans get their insurance through the Department of Veterans Affairs, which owns hospitals and employs doctors, nurses and other medical professionals.

Democrats are also promoting Medicaid buy-in plans. While Medicare covers seniors, Medicaid is the government-run health plan for the poor, known as HUSKY in Connecticut.

This month, Blumenthal and Murphy helped introduce “the State Public Option Act,” which would allow states to create a Medicaid buy-in program for all their residents, regardless of income. Connecticut is already exploring the implementation of a public option in Access Health CT, which currently only offers policies from Anthem and ConnectiCare.

However, the Kaiser Family Foundation poll found that, despite all the recent attention on proposals to expand Medicare or Medicaid, Democrats would rather the new Democratic majority in the U.S. House of Representatives focus its efforts on “improving and protecting the ACA” rather than “passing a national Medicare-for-all plan.”

About half, or 51 percent, of Democrats said House Democrats should reform and strengthen the ACA, while four in ten, or 38 percent, said they should focus on passing a national Medicare-for-all plan.

The state’s largest COVID vaccine center is up and running — but so far, there’s no formal plan to pay for it.