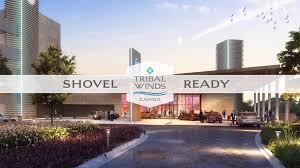 Washington – The Connecticut Indian tribes’ effort to open a new casino in East Windsor has taken yet another turn. The Justice Department is apparently investigating whether former Interior Secretary Ryan Zinke broke any laws when he derailed those plans in 2017.

According to a source, a grand jury is investigating whether Zinke lied to federal investigators who were looking into the way the Interior Department handled a petition by the Mashantucket Pequot and Mohegan tribes to open an off-reservation casino on property off I-91 in East Windsor.

Citing anonymous sources, the Washington Post was the first to write about the closed-door deliberations. The Connecticut Mirror was also able to confirm the existence of a grand jury and that it may have begun hearing testimony  from witnesses as early as December. Grand jury proceedings are not public.

If Zinke is charged with wrongdoing, that would strengthen a lawsuit the tribes re-filed an amended last week against the Interior Department.

But it’s not all good news for the tribes.

During a National Governors Association meeting in Washington D.C. over the weekend, Gov. Ned Lamont declined to say whether he supported the tribes’ joint venture, saying he preferred them to work out a deal with their rival MGM Resorts International, which has built a competing casino in Springfield.

The tribes have tried to move their joint venture forward for several years, and have the support of key federal lawmakers.

At the behest of Connecticut Sens. Richard Blumenthal and Chris Murphy and Reps. John Larson, D-1st District and Joe Courtney, D-2nd District, the Interior Department’s inspector general last year conducted an investigation into how the Interior Department handled the tribes’ petition, saying political influence may have played a role.

The Office of Inspector General  determined Zinke, who left the Interior Department earlier this year,  had lied to them in the course of that inquiry and  referred the matter to the Justice Department.

Zinke could not be reached, but has said he was interviewed twice by the Office of Inspector General and that he was truthful both times.

“There seem to be reliable reports that a grand jury investigation has begun,” Blumenthal said on Monday. “I am hopeful that everyone with knowledge will cooperate and I hope it will hold accountable anyone who has violated protections against conflict of interest, unfair favoritism or self-dealing.”

Interior Department approval was needed because the tribes’ agreements with the state hold that the operation of a new casino in the state would violate a deal under which the tribes’ pay 25 percent of the slot machine revenue from their tribal casinos, Foxwoods and Mohegan Sun, to the state. To be sure it wouldn’t lose that revenue, the state required that the agreements be amended and approved by the Interior Department before the state would approve the East Windsor casino, which would be called the “Tribal Winds.” 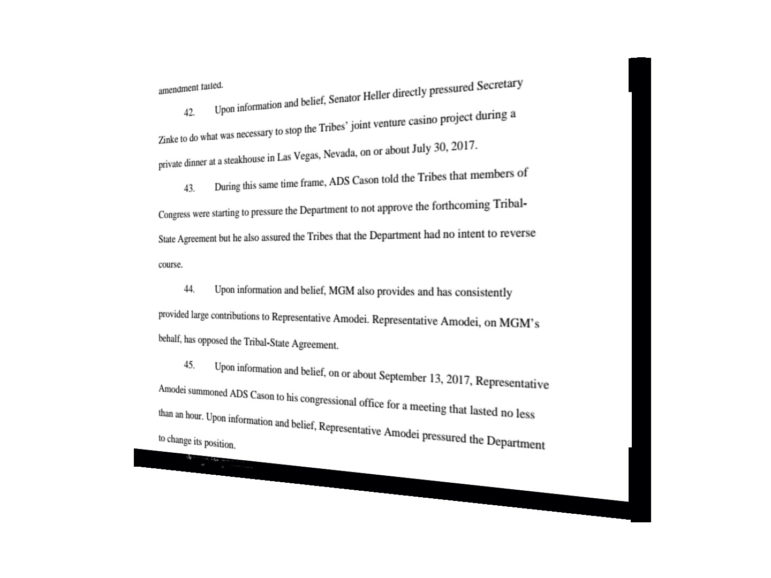 The Mashantucket Pequot and the Mohegan claim that the Interior Department refused to sign off on the casino project after intense lobbying by MGM and two  Nevada lawmakers, former Sen. Dean Heller, and Rep. Mark Amodei.

The tribe’s initial lawsuit, rejected by a federal judge in Washington D.C. in October, focused on the Interior Department’s failure to  publish its decision in the Federal Register within 45 days of its receiving a petition regarding a compact between a tribe and a state.

The judge agreed with the Interior Department that the agency was not bound by the 45-day rule, because the agreement that the Mashantucket Pequots have with the state is not a formal compact, but a mediated “secretarial” agreement.

In the new lawsuit, the tribes claim that when MGM became aware in 2016 of the plans to build a casino in East Windsor, Heller proposed an amendment to a defense bill that would have prevented Indian tribes from operating commercial casinos in the same state where they operate casinos on a reservation. The amendment failed to pass.

The lawsuit said that Heller then directly pressured Zinke to do what was necessary to stop the tribes’ joint venture casino project during a private dinner at a steakhouse in Las Vegas, Nev. “on or about July 30, 2017.”  MGM has been Heller’s “single largest contributor since 2005,” the lawsuit says, and the company has also “consistently provided large contributions” to Amodei.

It also said that Heller and Amodei had placed political pressure on other Interior Department officials whose “actions were  arbitrary, capricious, an abuse of discretion, and not in accordance with law.”

The Interior Department did not have an immediate response to the lawsuit.

The tribes may also get help in winning final approval from the state for their new casino from the general assembly.

There’s a move among some state lawmakers to help the tribes with a bill that would not require the joint venture to be seek approval from the Interior Department.