Baby delivered in toilet after calls for help were ignored , suit alleges 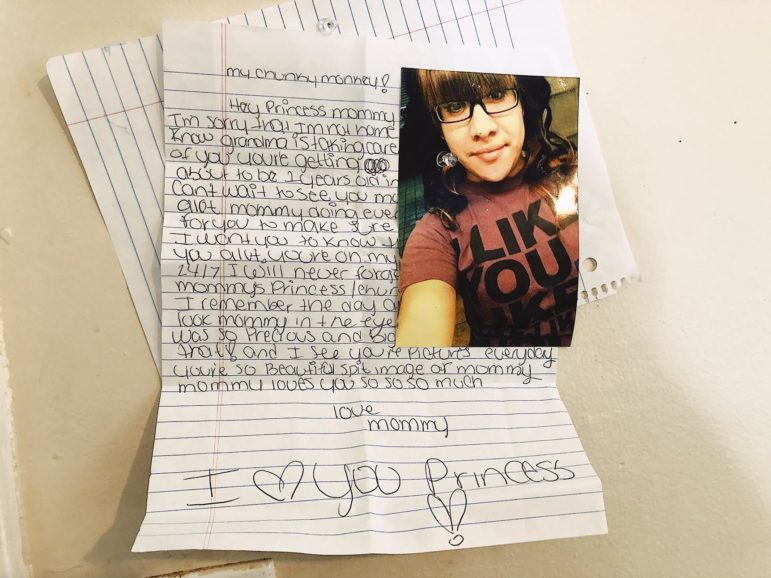 A photo of Tianna Laboy is pinned to her mother’s wall along with a letter she penned for her baby.

Days before her baby was born in a prison cell, Tianna Laboy walked the halls in pain, pleaded for a doctor and cried out in the middle of the night, but help never arrived, her attorneys charged in a lawsuit filed Sunday in federal court.

Finally, early one morning last February, she gave birth in the toilet of her locked cell at York Correctional Institution in Niantic.

“She felt like she had to go to the bathroom, and she recalled that her mother told her if she feels that, be careful because it could be the baby coming,” her attorneys, DeVaughn Ward and Kenneth Krayeske, wrote. “Upon sitting down, she realized that her baby was crowning.”

The infant hit her head as she fell into the toilet bowl. Laboy pulled the baby out and, at the urging of her cellmate, “patted her on the back to get all the fluid out,” the lawsuit says. The baby then began to breathe.

A year later, with a Department of Correction investigation still underway, Laboy is suing a bevy of officials – including former DOC Commissioner Scott Semple, the medical director, OB/GYN and warden at York, two UConn Health staff members, and two prison guards – alleging denial and delay in medical care. The lawsuit includes multiple counts of deliberate indifference, negligence and false imprisonment. The third charge refers to the baby’s birth behind bars.

Karen Martucci, a spokeswoman for DOC, said the department does not comment on pending litigation. Semple retired at the end of last year. A UConn Health spokeswoman also declined to comment Sunday.

The correction department announced in February 2018 – less than two weeks before Laboy gave birth – that it would move responsibility for the state’s inmate medical care from UConn Health to the DOC. State auditors had faulted the correction department’s $100-million-a-year, no-bid contract with UConn Health and its inmate care unit, saying that quality controls were substandard and the unit was policing itself. DOC assumed control in July.

After Laboy’s baby was born, two UConn Health employees were walked off the site and told not to return while the incident was under review.

“It really just leaves me speechless that someone could treat another human being, let alone a 19-year-old woman who is going through her first pregnancy and writhing in pain, like that,” Ward said. “How anybody could watch that and not try to help, it leaves me baffled.”

In the lawsuit, the attorneys paint a grim picture of the health care system inside York Correctional, the state’s only women’s prison. The OB/GYN was available only on Mondays, Wednesdays and Fridays, “despite serving a population of patients that could go into labor or have another life-threatening emergency … at any time,” they wrote. 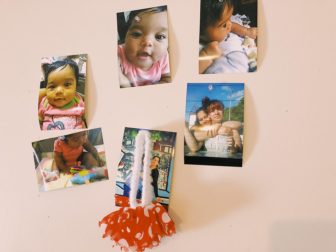 Laboy was not offered a tour of a hospital maternity ward and health workers never discussed a birthing plan with her, a break from standard protocol, the lawyers said. Prison staff and the Department of Children and Families did not arrange custody of the child with Laboy before the birth.

On Feb. 9, four days before the baby was born, Laboy reported seeing clear discharge and feeling “mild” abdominal discomfort. Her belly had dropped and she experienced “excruciating” back pain, the lawsuit says.

She initially was told she couldn’t see medical staff because she hadn’t filled out the proper form, her attorneys said. After completing the paperwork, Laboy learned that the OB/GYN was not available, “nor was there a substitute.”

Two days later, the discharge became thicker and contained blood. The lawyers said Laboy went to see health workers, but was told she should return if and when her contractions were less than two minutes apart. By Feb. 12, the eve of the birth, Laboy reported feeling as though her stomach was “twisting inside out.” She called for medical attention, but the nurse on duty gave her a cup of water and a heating pad, advising that Laboy was not in labor, her attorneys said.

“For the remainder of the night … Laboy laid awake crying in pain,” the lawsuit says. “The officers in the area checked on her every 15 minutes but told her there was nothing they could do as medical ‘didn’t want to see her again.’”

“How anybody could watch that and not try to help, it leaves me baffled.”

At 4:30 a.m. the next day, Laboy reported a “large” amount of bloody discharge and severe abdominal pain. She pressed the call button in her cell and again sought medical care. Staff told her the doctor would be in at 7:30 a.m., according to the lawsuit.

With no feminine hygiene products available, she placed a T-shirt between her legs and walked to the cafeteria for breakfast, her attorneys wrote. Laboy used prison walls for support on her way back.

Concerns about the standard of health care in Connecticut’s prisons have festered for years but returned to the public eye last winter when the correction department said it would take over inmate medical care, ending its 21-year contract with UConn Health.

Substantial budget cuts, a lack of outside oversight and a history of complaints had fanned fears among some lawmakers and civil rights groups about the quality of medical and mental health care being provided to prisoners.

The lawsuit filed Sunday highlighted some of the turmoil and pitfalls in the long-running UConn-DOC arrangement. In a May 2018 deposition for a different legal case, correction department Medical Director Kathleen Maurer testified that she repeatedly told Semple “the inmates were not receiving care that met the community standard.”

“Delay of care was a repeated concern that came to Dr. Maurer’s attention as she reviewed medical cases in the DOC,” Laboy’s lawyers, who reviewed the deposition, wrote in the lawsuit. Dr. Maurer said there was “essentially no way” to hold doctors accountable for their violations, they added. 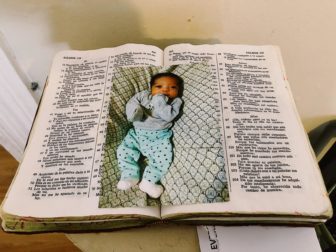 A photo of baby Naveah sits atop a bible at Karine Laboy’s New Britain home.

At one point, when talk of inmate health care problems reached the General Assembly, lawmakers directed the correction department to seek a new partnership. Dr. Maurer noted in her testimony that Semple had said to her: “We cannot embarass our state’s flagship university.”

“Dr. Maurer testified that she interpreted defendant Semple’s response that she was to trade inmate health care for UConn’s reputation,” Laboy’s lawyers wrote.

During the deposition, Dr. Maurer said UConn Health conducted peer reviews of its medical staff, but the reviews did not always reflect what had happened. In a number of cases, DOC would have found violations in policy and procedure, she testified, but UConn Health officials reviewing the same cases would claim there were no violations.

When DOC announced last year that it was taking over inmate medical care, UConn Health denied that concerns about the standard of care were behind the decision.

Ward, Laboy’s attorney, said his client’s case was “symptomatic of broader issues” within the correction department.

“On one hand, we are a state that claims to be compassionate and sympathetic to people who are incarcerated, but in practice that humanity only begins if they’re fortunate enough to make it out of prison,” he said.

Even after DOC assumed control of inmate care, 90 positions remained vacant as of December – about 15 percent of all medical staff. Front-line workers, including physicians and nurses, have complained of long hours and the impact that is having on the care they provide.

Gov. Ned Lamont, who is trying to close a $3.7 billion deficit over the next two fiscal years, has suggested giving the department $616.5 million next year, an $8.5 million increase over the current budget but $7.7 million less than what DOC leaders had requested.

‘I got real emotional’

On a recent morning, Karine Laboy unfolded a handwritten note from her daughter. It was a birthday letter Tianna had penned for baby Naveah, who just turned one.

She looked wistfully at the loopy handwriting.

“I was supposed to read it to Naveah on her birthday, but I got real emotional,” said Laboy, who took custody of her grandchild last year. “I haven’t read it to her yet.”

Tianna has been in custody since her 2017 arrest for stabbing a companion. She was sentenced last October to seven years in prison after pleading guilty to first-degree assault.

The chain of events leading to her granddaughter’s birth still haunts Laboy. She didn’t hear what had happened until a full day later. 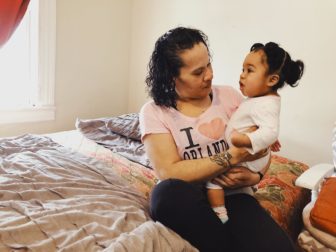 “Wednesday morning, I get a picture on my cell phone of a newborn baby. That was my grand-baby,” she said. Naveah was born on a Tuesday.

She bristles, thinking of her daughter squatting over a toilet seat, shaking in pain. Shortly after Tianna pulled the baby from the toilet, medical staff arrived and cut the umbilical cord, the lawsuit says. She was then taken to Lawrence and Memorial Hospital.

“I was really devastated that my daughter gave birth in a jail cell,” Laboy said. “What mother wants to hear that?”

But the months that followed also held joyful moments, watching her granddaughter grow. Lately, her days are a whirlwind of changing diapers, feeding the baby, meeting with lawyers and signing papers. She is also named as a plaintiff in the lawsuit.

As wisps of snow fell on a chilly weekend morning, she sat down on a bed in her New Britain home with Naveah in one hand, Tianna’s letter in the other. She smoothed out the paper as she began to read aloud.

“Hey princess,” she said. “Mommy misses you so much.”