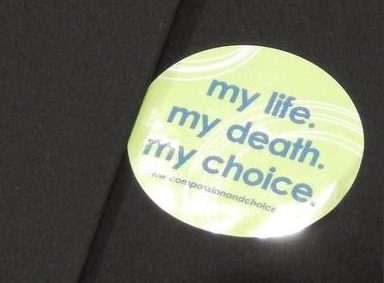 Supporters of aid-in-dying legislation are optimistic about the bill’s chances this year.

Buoyed by a change of heart from the state’s medical society, proponents of legislation that would let terminally ill patients access medication to end their lives say they feel more optimistic about the bill’s chances this year.

The Connecticut State Medical Society, which had long opposed the so-called aid-in-dying measure, recently adopted a position of “engaged neutrality,” meaning the group will allow its doctors to decide whether they want to prescribe a lethal dose of medication if such a practice is legalized.

That, coupled with a new crop of lawmakers who appear more open to the proposal, may give the bill better odds this year, supporters said.

“The majority of physicians probably will not feel comfortable choosing to participate in this aid-in-dying process, but there are more and more physicians who understand … that helping people maintain the quality of life they want and make their own decisions is consistent with their role,” said Rep. Jonathan Steinberg, a co-chair of the legislature’s Public Health Committee.

A public hearing on the bill is scheduled for 10:30 a.m. Monday in the Legislative Office Building.

The measure would allow doctors to prescribe a lethal dose of medication to patients who have six months or less to live and who are in “deep and dire” pain. Two physicians, including a primary care doctor who is familiar with the patient, would have to sign off on the decision.

State Rep. Josh Elliott, D-Hamden, said most people who have expressed interest in an end-of-life program don’t actually go through with it.

“What they want is just control,” he said. “So it’s really important for us to not be legislating based on morality, but allowing people to have ownership of their own lives.”

Aid in dying is legal in Washington D.C. and seven states: California, Montana, Colorado, Hawaii, Oregon, Vermont and Washington. Steinberg said Connecticut lawmakers have reviewed legislation approved in some of those states and tracked annual reports on the issue.

“Doctors are not very accurate at predicting six months to live. How many lives are going to be cut short?”

The proposal has been raised many times in Connecticut, including as recently as last year, but has never made it out of committee.

“I think we have a decent prospect this year,” Steinberg said. “We have a lot of new members in the legislature who may have a different point of view.”

The bill also has aroused frustration among detractors, who say old concerns aren’t addressed in the latest version.

Stephen Mendelsohn, another representative of Second Thoughts, said Thursday that terminal diagnoses are not always precise.

“Doctors are not very accurate at predicting six months to live,” he said. “How many lives are going to be cut short?”

The Family Institute of Connecticut denounced the plan in an email blast and urged opponents to attend Monday’s hearing.

“The societal implications of legalizing assisted suicide are staggering,” Peter Wolfgang, the group’s executive director, wrote. “Government and doctors would be endorsing suicide.

“We cannot let this happen in Connecticut.”