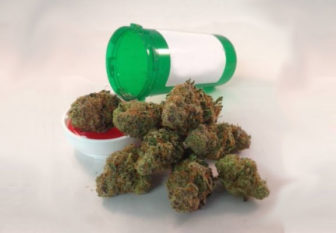 A bill laying the foundation for a recreational marijuana industry in Connecticut cleared a committee Monday.

Lawmakers voted Monday to advance the first of a package of bills that would legalize recreational marijuana, a step they lauded as necessary to begin upending decades of inequality in arrests and convictions against minority communities.

The bill approved by the legislature’s General Law Committee would lay the foundation for a marijuana industry in Connecticut. Among other things, it would establish a licensing process for growers, manufacturers and retailers of the drug.

But the flashpoint in Monday’s debate came over the issue of equity incentives for people in areas where high rates of pot-related arrests have occurred. The measure would give minority entrepreneurs advantages that include a lower fee structure and priority in the application process.

The bill also would require owners of marijuana establishments who are not minority entrepreneurs to reinvest in communities disproportionately affected by the War on Drugs, perhaps by using revenue to help build schools or neighborhood centers, or by hiring people from those communities.

Legislation that would erase criminal records for marijuana possession, that would legalize possession of less than 1.5 ounces of pot (by those 21 and older), and that would tax recreational cannabis are being weighed by other committees.

“When you put a knife in the back of a person – in this case, an entire community – for 80 years and you start to take it out, that’s not complete. That’s not how you help a community that’s been devastated for 80 years,” he said. “You take the knife back and there’s still a hole there. If we pass this bill – OK – now how do we remedy the hole? You have to be equitable.”

McCrory ultimately voted against the measure, saying it didn’t do enough to ensure people of color had an entry point into the industry.

Rep. Geoff Luxenberg, D-Manchester, said he favored the equity provisions, but lawmakers should consider even more remedies for people harmed by the criminalization of marijuana.

“In any way you want to measure it, this has had a racially disparate impact on our community nationally,” he said. “But sometimes in this country when we have a policy that isn’t working, that is creating racial divisions, that is harming certain communities more than others, we correct that policy. And in the past when we corrected that, it hasn’t done enough just to correct it and not provide a remedy.”

Republicans on the committee took issue with the equity proposals.

“To place someone that has been arrested for a crime above law abiding citizens by a panel that will consider who will get these licenses to me just doesn’t seem right,” Sen. Kevin Witkos said. “What kind of message are we trying to send to folks who are doing the right thing?”

Witkos also pointed to statistics showing that towns like Clinton and Granby were among those in Connecticut most affected by pot-related arrests, seeking to dispel the notion that only cities were afflicted.

The bill, which passed 10-8 Monday, still must be approved by House and Senate.

It’s not the first time legislation seeking to legalize recreational marijuana has cleared a committee. Last year, the Appropriations Committee voted 27-24 to advance a similar bill, though the General Assembly did not take action on it.

While a plan to tax the marijuana has not yet been developed, legislative leaders expect it would be close to the effective 20 percent rate imposed in neighboring Massachusetts.

The Bay State adopted a 17 percent state levy on the drug – a 10.75 percent excise tax and a 6.25 percent sales tax. In addition, Massachusetts cities and towns can impose a 3 percent local surcharge.

Members of the General Law Committee on Monday also greenlighted a proposal to expand the use of medical marijuana to include people who struggle with opioid addiction. The move came after fierce objection from the medical community, including the Connecticut State Medical Society.

“If we’re being thoughtful about the people in the state of Connecticut, how to protect public health but also rein in some of the abuses of Big Pharma, we have to do the research and have opportunities for people to find alternative ways to manage pain,” Luxenberg said.