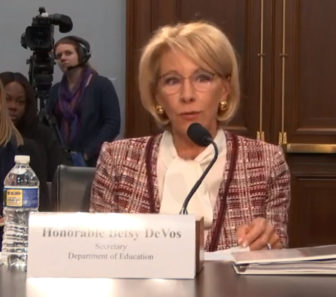 Washington – Rep. Rosa DeLauro used her new clout as an Appropriations subcommittee chairman to tussle with Education Secretary Betsy DeVos on Tuesday over a report by an education advocacy group accusing her agency of not providing effective oversight of federal charter school funding.

DeVos was the sole witness at a hearing before DeLauro’s subcommittee to answer questions about the Trump administration’s latest budget request for the U.S. Department of Education, which would boost federal charter school funding by $60 million while cutting $7 billion, or 10 percent, of its budget this year from other programs.

DeLauro grilled DeVos about the findings of a report by the non-profit advocacy group Network for Public Education that said the U.S. government has wasted up to $1 billion on charter schools that never opened, or operated for a short while and then closed because of mismanagement.

“It sounds like you are saying, ‘This is not our job,’” DeLauro said. “Can you explain how you think not stopping known waste fraud and abuse in the Charter School Program is not the department’s job?”

Charter schools are publicly financed but privately operated, and are a part of the “school choice” movement supported by the Trump administration. Before joining the administration, DeVos was the chairman of the pro-school-choice advocacy group American Federation for Children, and a force behind the spread of charter schools in her home state of Michigan.

DeLauro continued to ask DeVos what the Education Department was doing to recover the lost federal money.

DeVos said her department is “very aware” of the issues raised by the report and that the practices at the charter schools “long predate this administration.”

“We are very keen to ensure that the concerns raised are addressed,” DeVos said. “but you are always going to have schools that don’t make it.”

That was not what DeLauro wanted to hear.

“Madame Secretary, it would appear to me that based on this report and other reports that charter schools have enormous flexibility, and there seems to be no one who is overseeing how that flexibility translates into the use of federal dollars,” DeLauro said. “That’s irresponsible in terms of your job with regard to oversight.”

The report, titled “Asleep at the Wheel” said, “Of the schools awarded grants directly from the department between 2009 and 2016, nearly one in four either never opened or (soon) shut its doors.”

The report detailed the failures of dozens of charter schools, including one in Connecticut. 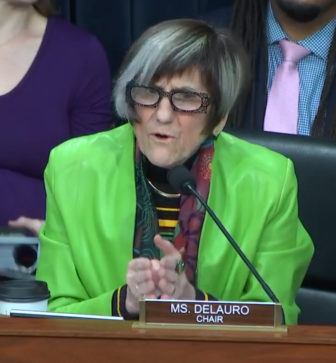 It said that in 2013, Path Academy opened in Windham and that its charter management organization, called “Our Piece of the Pie,” received a $585,800 grant to open the school.

“Within a few years the school was opening up unauthorized satellite campuses as well as falsifying enrollment and attendance data resulting in a $1.57 million overpayment to the school,” the report said. “Before the State Education Department pulled its charter, the school surrendered its charter.”

The school surrendered its charter last July, about two months after the state board of education voted to begin the revocation process.

DeVos was also questioned by Democrats on the panel about proposed Education Department cuts and plans to eliminate programs like the Special Olympics.

They also pressed DeVos on her proposed rule changes on campus sexual misconduct and her decision to rescind Obama-era discipline guidance to schools aimed at protecting minority students.

DeVos said her department had to make “difficult decisions,” but was bound by a directive to cut the federal deficit.

“I do not understand how you can support this budget and be the secretary of education,” DeLauro said “This budget under-funds education at every turn.”