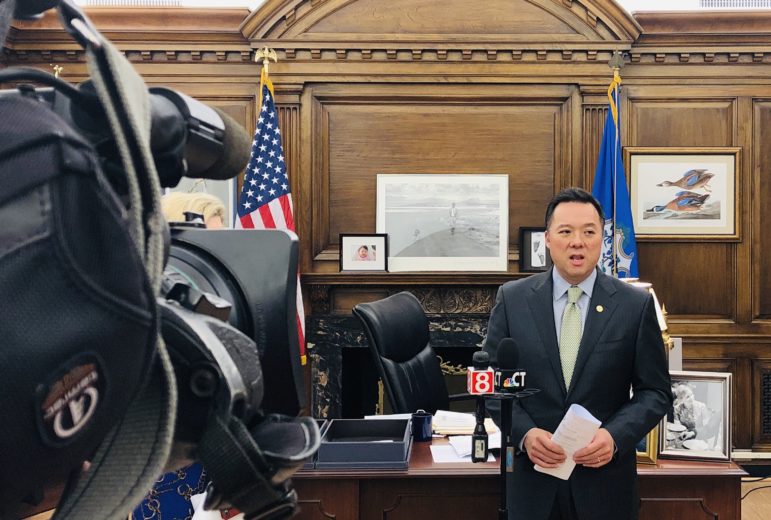 Attorney General William Tong laying out the state’s case against Purdue Pharma and the Sackler family.

Connecticut stepped up its legal fight with Purdue Pharma Monday, adding new defendants, a new charge and new allegations of wrongdoing by the Sackler family to a complaint that says the company and its wealthy owners promoted deadly opioid addiction.

The amended lawsuit, which was initially filed in December, says Stamford-based Purdue, the maker of OxyContin and other addictive pain relievers, and the Sacklers told doctors addiction was “not caused by drugs,” but instead was the result of “susceptible individuals.” Purdue said  “appropriate” patients would not get addicted, the lawsuit said.

The new filing also expands on Purdue’s tactics to maximize the sale of its opioids by pushing doctors to prescribe higher and higher doses.

“They pursued profits – financial gain – over the incredible and frankly, immeasurable, human toll and human cost of the opioid and addiction crisis,” Tong said.

Purdue pushed back strongly Monday against the new charges.

“Purdue Pharma and the individual former directors of the company vigorously deny the allegations filed today in Connecticut and will continue to defend themselves against these misleading attacks,” said company spokesman Robert Josephson.

The amended complaint, filed in state Superior Court, also alleges Purdue used a “savings card” to provide discounts to patients not fully covered by insurance in order to keep patients on opioids long enough for addiction to take hold and conducted a failed study into the use of an opioid for osteoarthritis.

The amended lawsuit also addresses Purdue Pharma’s threats to declare bankruptcy to avoid what could be billions of dollars in court judgments, as nearly 2,000 cities – including dozens in Connecticut — and 34 states have sued the pharmaceutical company over its sale of opioids.

The amended lawsuit said Purdue funneled billions of dollars to the Sacklers from the sale of opioids — at least $700 million a year from 2010 to 2020 — which the state is attempting to “claw back” to make available to pay court judgments or settlements. It also adds a new charge – the fraudulent transfer of funds.

“They pursued profits – financial gain – over the incredible and frankly, immeasurable, human toll and human cost of the opioid and addiction crisis.”

The money to the Sacklers was routed through other Purdue companies, including Purdue Holdings L.P., PLP Associates Holdings L.P., Rosebay Medical Company, L.P., and Beacon Company.  Those companies and their executives are now new defendants in the suit.

“We will not allow Purdue Pharma to cry poverty after illegally transferring hundreds of millions of dollars to members of the Sackler family—unearned funds these individuals reaped as Connecticut families suffered,” Tong said.

Tong also said Purdue and its executives and owners knew “by the latest 2007 and probably earlier,” that they were liable for the addictive qualities of their products because they pleaded guilty to federal criminal charges in 2007.

“So they were on notice that we were going to hold them responsible or someone was going to hold them responsible for the tremendous financial cost of the addiction crisis fueled in part by Purdue Pharma and its owners and executives, and with that notice … they took billions of dollars out of the company, which were looted and siphoned into trusts and entities controlled by individual defendants, including members of the Sackler family,” Tong said.

Last month, Purdue and the Sacklers reached their first settlement on an opioid case, agreeing to pay Oklahoma a $270 million settlement.

“The complaint is part of a continuing effort to try these cases through the media rather than the justice system,” Josephson said.”Such allegations demand clear evidence linking the conduct alleged to the harm described, but we believe the state fails to show such causation to support its sweeping legal claims.”

While many have sued Purdue, Connecticut was the first state, after Massachusetts, to also sue the Sacklers and company executives. But more states are now also targeting the Sacklers, including New York, which last month amended its lawsuit against Purdue to charge the pharmaceutical company with fraudulently transferring money to the Sacklers despite knowing it faced major liabilities that would make it insolvent.

Connecticut’s lawsuit is based on a state law, the Connecticut Unfair Practices Act, which imposes a penalty of up to $15,000 a day on violators.

It details the economic cost of opioid addition in Connecticut, saying that in 2016 it topped more than $10.3 billion. That included $493 million in healthcare spending, and $144 million in costs associated with investigating and prosecuting crimes related to the epidemic.

Opioids were involved in a record 47,600 overdose deaths in 2017 in the United States, according to the U.S. Centers for Disease Control and Prevention.