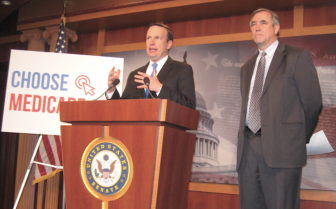 Sens. Chris Murphy and Jeff Merkley at the introduction of their Medicare buy in bill last year.

Washington – A sweeping Medicare for All proposal was given its first public hearing Tuesday, but isn’t likely to become law anytime soon.

Still, the hearing before the House Rules Committee allowed progressive House Democrats to promote a controversial proposal that has split their party – as well as Connecticut’s all-Democratic congressional delegation.

Sen. Richard Blumenthal, D-Conn., and Rep. Jahana Hayes, D-5th District, are co-sponsors of Medicare-for-All plans that would replace private insurance and  Medicare and Medicaid with a universal, “single-payer”  health plan for all Americans that is run by the federal government and most likely paid for through new taxes on individuals and businesses.

Other members of Connecticut’s congressional delegation support more modest changes, mostly Medicare “buy in” plans that would allow Americans to purchase coverage in a health care plan modeled after the one that covers those who are 65 and older.

Rep. Rosa DeLauro, D-3rd District, for instance, plans to reintroduce a bill Wednesday that would automatically enroll Americans who are uninsured or do not have employer-sponsored insurance—including those who purchase coverage on the individual market—into a “Medicare for America” plan. Unlike traditional Medicare, DeLauro’s plan would offer full coverage for prescription drugs, dental, vision, and hearing services. 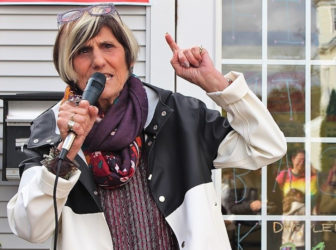 Murphy’s plan, co-sponsored by Sen. Jeff Merkley, D-Ore., would give people who qualify for Affordable Care Act subsidies the option to purchase a new Medicare “Part E” plan. It would use the same network of doctors and hospitals who now serve Medicare patients, but would include other non-elderly medical services, including pediatrics and maternity.

Neither DeLauro’s or Murphy’s bills would have a big impact on the private health insurance marketplace, nor would they change Medicaid or traditional Medicare.

But others are seeking a much bigger overhaul of the nation’s health care system, saying a piecemeal approach won’t work.

Blumenthal is a co-sponsor of Sanders’ bill, as are several of the leading contenders for the 2020 Democratic nomination for the White House, including Sens. Kamala Harris, Cory Booker, Kirsten Gillibrand and Elizabeth Warren.

However, former Vice President Joe Biden, another Democrat running for the White House, on Monday said he supported giving Americans an option to buy into a Medicare-based insurance plan.

At Tuesday’s Rules Committee hearing on the House Medicare for All proposal, sponsored by Rep. Pramila Jayapal, D-Wash., and supported by Jahana Hayes and more than 90 other House Democrats,  Republicans panned the plan as too expensive and likely to erode the quality of health care in the nation.

The top Republican on the committee, Rep. Tom Cole, R-Okla., called the proposal a “radical bill” and said its sponsors “have not told us how much this massive new program would cost, who would pay for it, and how much taxes would have to go up” to cover the program’s costs.

The Congressional Budget Office plans to release a report Wednesday on the costs of single-payer coverage. A Republican witness at the hearing predicted it would cost between $32 trillion and $39 trillion.

Meanwhile, witnesses invited to testify by Democrats told compelling stories about the shortfalls of the current system, in which 173 million Americans are dependent on employer-based coverage and the cost of medicine is out of reach for many of the uninsured.

Ady Barkan, a health care activist dying of ALS, told of raising money to pay for medical care through a “GoFundMe” page.

“We should have a national safety net to help us when we fall,” Barkan said through the aid of a computer because he can no longer speak.

Farzon Nahvi, an emergency room physician in New York, told of patients who had to forego critically needed care, including one with appendicitis, because they could not afford it.

“If you ask any ER doctor, nurse, or janitor in this country, you will hear countless stories of patients who came to seek medical care only to walk out in the middle of their treatment,” Nahvi said. “The reality for many people in this country is that seeking medical care means weighing their health against their wallet.”

The bill considered in the House Rules Committee Tuesday is not expected to advance and many never even receive a hearing in the congressional committees that oversee Medicare.

Even if the measure were to advance through the House, the legislation would have virtually no chance of prevailing in the Republican-controlled Senate.

But the issue of health care is important to voters, polls show, and will continue to be a top priority among Democrats, especially since the future of the Affordable Care Act is uncertain.

On Wednesday, lawyers will file briefs in a case before the 5th District Court of Appeals in New Orleans that seeks to overturn a lower court ruling that invalidated the ACA.

The Trump administration has joined that lawsuit on the side of those who seek to scrap the ACA and President Donald Trump, appearing at a National Rifle Association conference in Indianapolis last week, repeated his intention to eliminate the health care law.

“The Trump administration’s assault on the American health care system has reached unprecedented levels,” said Murphy at a press conference outside the U.S. Capitol Tuesday.

Murphy said Republicans once vowed to repeal and replace the ACA, but now there’s no talk of providing an alternative.

“They no longer attempt to perpetuate that ruse on the American people,” he said.