Hope for new federal highway bill dims, but CT ‘not ready’ for it anyway 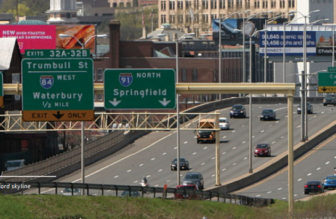 Washington — Prospects for a massive, new federal highway bill dimmed Wednesday as Democratic leaders and President Donald Trump failed to even sit down to discuss the plan, the result of increased enmity between Capitol Hill Democrats and the White House.

Connecticut may not be able to benefit from attempts in Washington D.C. to send more transportation money to states — even if Congress is able to do what now seems increasingly impossible, said Don Shubert, president of the Connecticut Construction Industries Association.

That’s because Connecticut would have to come up with about 20 percent of the cost of any road or bridge project that’s funded by the new federal highway bill.

Without a new source of revenue to fatten the Special Transportation Fund, the state could not afford to pay its share of a project, Shubert said.

“Unless Connecticut comes up with the matching funds, we are going to be sitting on the sidelines,” he said. “We’re just not ready yet for a highway bill.”

Shubert and his organization support Gov. Ned Lamont’s plan to place tolls on three federal interstate highways, I-84, I-91 and I-95 and on a state road, the Merritt Parkway.

According to rough estimates, when fully implemented those tolls would bring in between $600 million and $800 million in new revenue to the state’s transportation fund. Federal law requires toll revenue to be spent on the highways that are tolled, which means it could be used to help the state come up with matches for federally funded projects on those highways.

The state’s Special Transportation Fund (STF) takes in about $1.4 billion a year from state fuel taxes, motor vehicle sales taxes and fees for licenses and registrations and other sources. Connecticut bonded $750 million this fiscal year to support its transportation capitol program, and also will receive more than $542 million for infrastructure work from the federal FAST Act this year.

But Lamont and the state Department of Transportation say more money is needed, especially since the STF is also used to cover the annual debt payments on the state’s transportation borrowing and to meet the needs of other state agencies.

“The Department of Transportation has hundreds of projects in the pipeline at all times, from simple maintenance to keep the system in good repair, to improved highways, new bridges, new trains and new buses,” said Judd Everhart, spokesman for the DOT. “These projects cost money, and lots of it. In order to plan and execute projects, the agency needs a steady, reliable and sustainable source of funding – on the state and federal level.”

Everhart, however, said the transportation department is “officially agnostic” on the question of tolls.

Opposition to Lamont’s toll plan has stalled it in the General Assembly, which won’t vote on the proposal before its regular session ends on June 5. The issue could be pursued, however, in a special session this summer.

Rep. John Larson, D-1st District, is pushing for a plan to build a system of highway tunnels under Hartford and East Hartford, burying parts of I-91 and I-84 underground. He plans to meet with Lamont and officials at DOT to promote his proposal, which has been criticized as too expensive and not the best solution to reduce downtown congestion.

Larson hopes a new federal infrastructure bill would include a provision that would cut Connecticut’s match for the tunnel project to 10 percent.

Yet the lawmaker also says some sort of toll plan is needed to meet the state’s transportation needs.

Estimates for Larson’s project have run from a low of about $10 billion to a high of $30 billion.

Both Democrats and Republicans are eager for a new infrastructure bill that would replace the Fixing America’s Surface Transportation Act or “FAST Act,” that expires next year.

House Speaker Nancy Pelosi, D-Calif., and Senate Minority Leader Charles Schumer, D-N. Y., emerged from a meeting with Trump at the White House in late April saying they had agreed to pursue a $2 trillion infrastructure package, a big increase over the $305 billion the FAST Act will provide states over its five-year life.

Pelosi and Schumer were scheduled to meet with Trump on Wednesday for a second round of talks, where they expected the president to put forth his plan to pay for the proposal.

The Trump administration previously floated a proposal for the federal government to fund 20 percent of infrastructure investment and encourage the private sector to chip in the rest. Democrats, however, want most infrastructure funding to come from the government.

The discussion over how a new infrastructure bill would be funded, however, never took place.

Trump declared that bipartisan cooperation was impossible while House committees are investigating him, and refused to even sit down when he walked into the scheduled Cabinet Room meeting with Pelosi and Schumer.

Trump then told reporters at a hastily scheduled press conference in the Rose Garden that he told the Democratic leaders they must choose between pursuing infrastructure or their increasingly aggressive investigations of his finances, businesses and administration, and increasing Democratic calls for impeachment of the president.

At a Democratic press conference, Schumer said “to watch what happens in the White House will make your jaw drop.”

“We are interested in doing infrastructure,” Schumer said. “It’s clear the president isn’t. He is looking for every excuse.”

A sign hung on the president’s lectern in the Rose Garden featured the words “No Obstruction, No Collusion.”

Schumer said the sign indicates Trump’s move was planned and that the president stormed out of the meeting because the White House failed to find a way to fund an infrastructure bill. 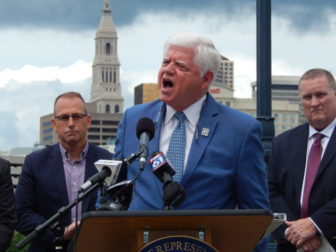 But Republicans are sure to resist any tax hikes as a way to pay for an infrastructure package and also oppose increasing the deficit, making it difficult to establish funding for even a fraction of the $2 trillion goal.

Larson is a sponsor of the “America Wins Act,” which would invest $1 trillion in the nation’s infrastructure –including the congressman’s proposed tunnel project — over 10 years.

The bill would be funded by a new carbon tax, an idea that is opposed by most Republicans and some Democrats.

“A carbon tax would be a costly, job-killing burden on American families and small businesses and would reverse the progress made towards achieving American energy dominance,” Scalise said.