If awkwardly, Lamont and labor unite over $15 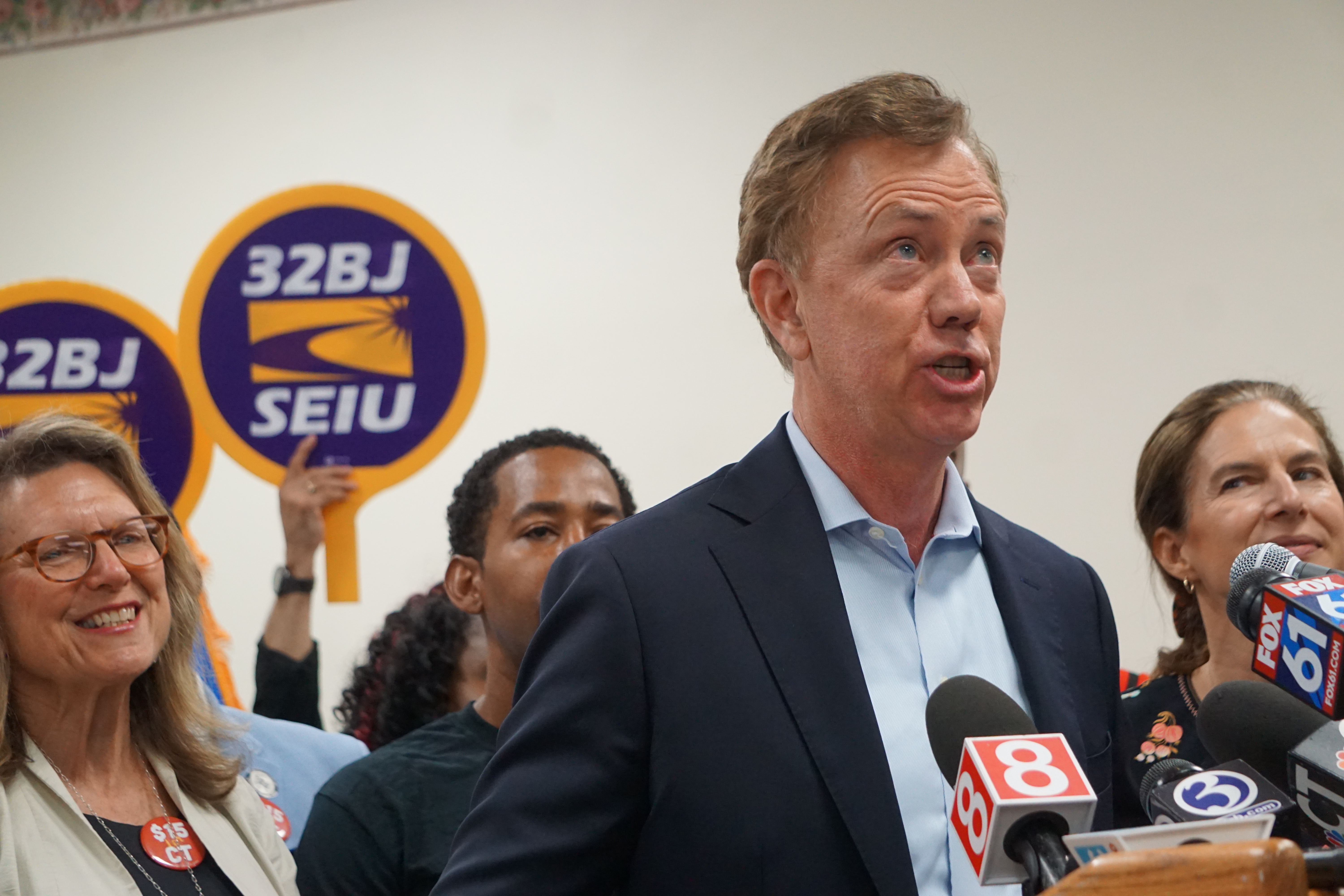 Gov. Ned Lamont channels Joe Biden: “This is a big…deal.” He is flanked by a smiling Sen. Julie Kushner and a nonplussed Lt. Gov. Susan Bysiewicz.

Gov. Ned Lamont went to a Hartford nursing home Tuesday to sign a copy of legislation raising the $10.10 minimum wage in five steps to $15, a moment of celebration and solidarity with labor progressives for a Democratic governor now blocking final passage of another labor priority, a paid family and medical leave bill.

The first minimum wage bill to reach a Connecticut governor’s desk in five years, the measure was guided through the General Assembly by two women, Democratic Rep. Robyn Porter and Sen. Julie Kushner. Each had repeatedly reminded their colleagues that the typical minimum-wage earner in the state is female, black or brown, and often an immigrant.

But the signing of only the fourth bill to reach Lamont’s desk and the first to merit a signing ceremony outside the State Capitol was not without its awkward moments, reminders of  Lamont’s diffidence to political stagecraft — and the fact he was celebrating with progressives furious over his 11th-hour threat to veto family leave over how the program would be administered.

The celebration was staged at the Parkville Care Center, a unionized nursing home that just struck a deal with an SEIU affiliate, District 1199. The governor’s staff was unaware that under different ownership and a different name, the facility was the scene of one of nation’s deadliest nursing home fires in 2003, an arson set by a disturbed patient that killed 16.

Workers from nursing homes and the fast-food industry were recruited by organizers to become voices of a movement, as was A.J. Johnson. The charismatic pastor of Urban Hope Refuge Church, Johnson said the minimum-wage campaign was central to his ministry in Hartford’s North End.

The pastor reminded them they had won.

“Can we please make some noise for that?” 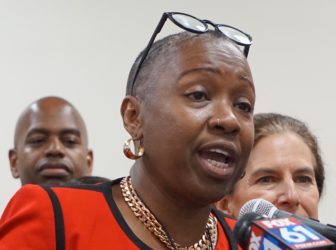 Rep. Robyn Porter. She got the pen.

Lamont, a Greenwich businessman who spent about $15 million of his own money on his campaign last year, acknowledged that the campaign was long. Passage was impossible over the past few years, blocked by a state Senate that had been evenly divided between Democrats and Republicans. Democrats now control the chamber, 22-14.

“This year, we got it done,” Lamont said to whoops and cheers.

The governor called the bill signing a moment of great import, comparing it to passage of the Affordable Care Act, albeit in an off-color way. He alluded to Vice President Joe Biden’s whisper to Barack Obama, caught on a hot microphone: “This is a big [expletive] deal.”

“As Joe Biden might have said,” Lamont said, making a face, “This is a big —

Lamont recalled the day he sat down with union members from SEIU affiliates, mainly women in minimum-wage jobs, and listened to their stories, their struggles.

Lamont acknowledged the roles of the two women crucial to passage, Porter and Kushner, the co-chairs of the Labor and Public Employees Committee. But then he moved to sign the bill without them speaking.

“I don’t know know what the drill is now, but it’s my opportunity, I think, to sign a bill,” Lamont said.

“Not yet,” Bysiewicz said.

Bysiewicz introduced Porter and Kushner. She also mentioned the importance of paid family and medical leave. 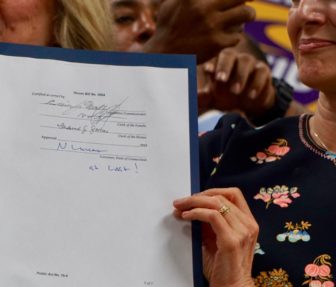 “What a day, what a moment,” said Porter, who spoke passionately about single mothers cobbling together minimum-wage jobs to run a household. “I have been that mom, that single mom, raising two kids with three jobs.”

Kushner, a retired UAW executive and former Working Families Party leader who made the minimum wage and family leave the foundations of her campaign last year to unseat a conservative Republican, said, “I know this would not have happened without a movement.”

Lamont signed a facsimile of the bill with one pen, adding a postscript: “At last!” He ignored the pile of would-be souvenirs, cheap plastic pens that were to be given to supporters as mementos, if only he had he used them to sign portions of his signature, the typical practice at bill signings.

The signing pen was handed to Bysiewicz.

She gave it to Porter.