The ads say seniors can save up to 30% on the cost of their medicine and urge Americans to call the White House and thank the president “for fighting for Rx Drug Discounts for Seniors.”

But Connecticut’s health insurers oppose the plan. And a recent Congressional Budget Office report said the president’s goal of lowering the price of prescription drugs will be offset by higher premium costs.

The CBO report also says the plan, which the administration wants to initiate on Jan. 1, 2020, would increase federal spending by tens of billions of dollars over a decade.

Trump’s proposal would only affect those with Medicare “Part D” prescription drug benefits, and some who are enrolled in Medicaid plans, known as HUSKY in Connecticut.

“A shadowy system of kickbacks,” is how Health and Human Services Secretary Alex Azar described the current system.

The administration’s proposal would outlaw the drug rebates and require pharmaceutical companies to lower the price consumers pay for a drug at their pharmacy instead.

But some say the proposal would increase premiums for all Part D enrollees because rebates would no longer be available to offset the cost to insurers, resulting in higher premiums.

In a letter to the Department of Health and Human Services, the AARP said it is concerned the proposal  “will not achieve the goal of lowering drug prices and may in fact lead to even higher prescription drug prices.”

“While the intent behind the proposed rule is laudable, we are troubled by estimates that the proposal will increase Medicare and taxpayer spending, raise premiums for all Medicare Part D beneficiaries, and increase revenue for drug manufacturers,” the AARP said. “As we look at solutions to lower prescription drug prices and costs to consumers, we need to find solutions that will actually lower prescription drug prices and not simply shift costs around within the system.”

But some patients, especially those with chronic conditions that require very expensive drugs, could benefit from the Trump administration policy because their savings at the pharmacy would more than make up for any increase in their Medicare Part D premium.

While the administration can use its executive power to eliminate rebates in the government-run Medicare and Medicare programs, Azar has called on Congress to broaden the ban to all insurance plans.

“Congress has an opportunity to follow through on their calls for transparency, too, by passing our proposal into law immediately and extending it into the commercial drug market,” he said. 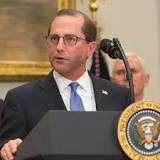 “We cannot achieve… savings if our leverage and negotiating power is weakened through well-intentioned but misguided actions like this proposed rule,” said America’s Health Insurance Plans President Matt Eyles. “Savings from rebates go directly to consumers, resulting in lower premiums and out-of-pocket costs for millions of hardworking Americans.”

Eyles also said “from the start, the focus on rebates has been a distraction from the real issue – the problem is the price.”

Aetna wrote Azar that “Rebates provide health plans with critical leverage to pressure drug manufacturers to lower drug prices and that leverage should be preserved.”

The nation’s drug companies, however, support the end of rebates.

“Our current health care system results in patients often paying cost-sharing based on the list price, regardless of the discount their insurer receives,” said the Pharmaceutical Research and Manufacturers of America (PhRMA), the trade group for the nation’s pharmaceuticals. “We need to ensure that the $150 billion in negotiated rebates and discounts are used to lower costs for patients at the pharmacy.”

And the American Medical Society endorsed the plan, conditionally.

“The AMA supports changes to the prescription drug rebate system that would allow patients to directly benefit from any price reductions negotiated with manufacturers,” the organization representing the nation’s doctors said. “However, the AMA also urged the U.S. Department of Health and Human Services (HHS) to consider the potential of unintended consequences for all beneficiaries, including the potential for increased premiums in Part D plans, no meaningful reductions in drug list prices, a decrease in the amount of price reductions offered and increased drug spending by Medicaid programs.”

Ian Walters, spokesman for the American Conservative Union, said it has launched an ad campaign promoting the Trump plan to eliminate drug rebates because “we make our voices heard on a lot of different issues,” and the administration is taking the “right path forward” on drug pricing.

The Center for Responsive Politics determined the ACU is a recipient of grant money that PhRMA distributes to groups that support the pharmaceutical industry’s position on issues. The grants are reported in filings with the Internal Revenue Service and not immediately disclosed to the public. In 2017, the latest year in which the filings are available, the ACU received $150,000 from PhRMA.

The nation’s health insurers say another Trump proposal, requiring pharmaceuticals to disclose the price of their drugs in their “direct-to-consumer” drug advertising, would do much more to lower the cost of medicine.

Congress is also considering a number of bills aimed at lowering the cost of prescription drugs, including several that would require drug manufacturers to report and justify significant price increases.