With a unanimous vote and a fair bit of emotion, the House of Representatives gave final approval Friday to legislation that expands post traumatic stress disorder benefits to first responders, but not before many lawmakers criticized the bill for not being inclusive enough. 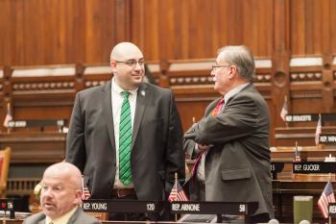 “When I first saw the limited scope of this, I wasn’t happy about it,” said Rep. Pat Boyd, D-Pomfret, and a volunteer firefighter, “but I get that this is the first time that this is going to cross the finish line in a very long time and that in itself is important.”

The bill, which was passed earlier this week by the Senate, has been seven years in development. If signed by Gov. Ned Lamont into law it will expand workers’ compensation benefits for police, firefighters and certain medical responders with PTSD, but does not include some emergency medical services personnel.

However, the bill mandates a study of a second expansion to all medical responders and Department of Correction officers; many House members said they hope to see the matter taken up in next February’s legislative session.

As the bill is written now, Boyd said, “If I respond to a triggering event in my town on the red fire trucks as a fire fighter, I’m covered, but if it happens to be that day that I’m needed on the ambulance, not the fire truck, and I respond in the white ambulance to the same triggering event … I’m not covered.”

“Nobody in this chamber thinks that’s right,” he said.

Before voting, lawmakers recounted horrific experiences they or family members had as first responders and emphasizing the difficulty of living with those memories.

“What I really want to say is this bill [is needed] because you truly can’t unsee, you can’t ‘unsmell’ what  you’ve been through, regardless of what piece of work  you’re doing, be it the paramedic, firefighter, police officer ,” said Rep. William Buckbee, R-New Milford. “Mental health has always taken kind of a back seat.”

“I wish this bill did more. It deserves to do more.”