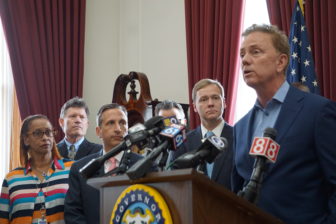 The tentative agreement between Gov. Ned Lamont and leaders of the Democratic majority boosts funding for education grants and nursing homes, expands Medicaid eligibility for working poor adults with children and settles a longstanding funding dispute with Connecticut’s hospitals.

The $43 billion, two-year budget does not include a proposed tax hike on sugary drinks or on capital gains earnings of the rich. Also absent are electronic tolls, though leaders said that issue could be revisited in a special session.

It also refinances future contributions to pension funds for teachers and state employees, shifting billions of dollars in costs — plus interest — onto taxpayers after 2032.

The new budget would close projected deficits totaling more than $3 billion over the next two fiscal years combined. It also would establish the largest budget reserve in state history, a $2 billion cushion against the next recession.

“We have a very different legislature than we had two years ago, we have a new governor and we had to balance a lot of concerns,” Rep. Jason Rojas, D-East Hartford, said of a revenue package that involved lots of compromise. 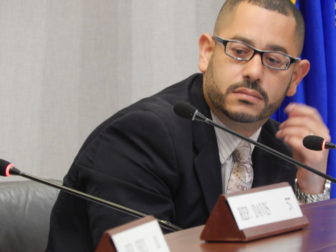 One of those concerns came from the governor. After raising state income tax rates in 2009, 2011 and 2015, Connecticut’s economy could not absorb another increase in its largest tax to avert the latest budget deficit forecast, he said.

But while Lamont and some of the new Democratic lawmakers from Fairfield County strongly opposed any increase in income tax rates — including those aimed only at wealthy households — a growing progressive element within the party pressed hard for the rich to pay more.

“That’s something we have to respect,” Rojas said. “They’re here, they’re active, they’re vocal, … and the debate isn’t over.”

Well, it’s over for the next three days, but Rojas’ point was that the discussion would continue in sessions to come.

“Leadership is totally owning that,” she said. “Are we disappointed? Absolutely.”

One of the key reasons for that debate involves tens of billions of dollars of unfunded pension liabilities Connecticut amassed over a 70-year period. Surging pension and other debt costs, coupled with an economy that recovered slowly after the last recession, have left the state budget plagued with deficit forecasts.

Even though income tax receipts have been sharply rising over the past year, analysts warned state finances needed to be adjusted.

When Lamont proposed his budget in February, the estimate was that state finances would run $3.7 billion in deficit over the next two years combined unless changes were made. 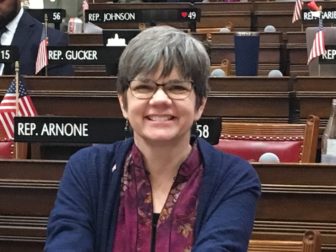 But legislators balked at some of Lamont’s alternatives. A tax of 1.5 cents per ounce on sugary beverages was scrapped amid strong opposition from urban lawmakers.

The governor’s plan to eliminate dozens of sales tax exemptions was also scaled back considerably. One of the key proposals that survived, though, eliminates the special 1 percent rate on digital downloads, replacing it with the standard rate of 6.35 percent.

The new budget includes a finance committee proposal for a one percent sales-tax surcharge on restaurant meals and other prepared foods. The $66 million it would raise originally was earmarked for cities and towns, but instead it will remain in the state’s coffers.

Lamont had recommended a tax on all e-cigarette products — including vaping pens and liquid cartridges — equal to 75 percent of the wholesale price. The budget instead includes a lesser tax, but only on cartridges — and only those that contain nicotine.

But some healthcare advocates have questioned how effective this approach would be.

A 2014 study conducted by the Salt Lake County Health Department in Utah found 61 percent of e-liquids collected from local vaping shops had nicotine contents that varied by at least 10 percent from the content posted on the label.

Other consumer-related revenue components of the new budget include a new fee of 10 cents on plastic bags and a 10 percent increase in the alcoholic beverages excise tax.

Opioid tax is out, hospital tax is a question mark

A new opioid tax of one-cent-per-milligram had been included in the package, but was stripped out Sunday.

The tax would have been imposed not at the retail level, but at the first point of sale in the state. In Connecticut, this most commonly involves distributors selling to health care providers. That’s because most of the opioids used in Connecticut are manufactured out of state. It was expected to raise about $20 million per year.

Critics of the tax said it would be passed onto insurance companies, and ultimately to patients.

On paper, the new budget will ask legislators to maintain the current provider tax Connecticut levies on its hospitals.

But there’s a chance that levy could change later this summer.

Lamont announced a tentative agreement last week to settle a lawsuit hospitals filed four years ago over the provider tax. The new budget also is expected to resolve a $200 million-plus dispute involving state payments to hospitals since last October for treatment of Medicaid patients. 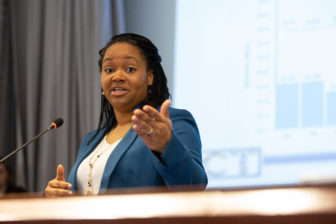 Office of Policy and Management Secretary Melissa McCaw, Lamont’s budget director, said legislators likely would be asked to return in special session this summer — after hospitals have ratified the settlement — to make adjustments to the provider tax and to supplemental state payments to the industry.

This could cost the state an estimated $160 million, which would be taken from this year’s projected surplus.

But House Majority Leader Matt Ritter, D-Hartford, said it is a reasonable price to pay to settle a lawsuit that might have cost the state billions of dollars had it lost in court.

Business groups objected to another tax hike in the budget designed to raise $50 million annually from so-called pass-through entities — limited liability corporations and other businesses that don’t pay the state corporation tax. Instead, the business earnings “pass through” to the owners, who then pay personal income taxes on them.

And while the wealthy won’t face an income tax increase, they will face what’s being called a “mansion tax.” It’s a special surcharge on the real estate conveyance tax aimed only at the sale of high-priced homes by people who in turn leave the state.

Minority Republican legislators, who are expected to unanimously oppose the budget because of the array of tax hikes, have not offered an alternative budget.

But Rep. Gail Lavielle of Wilton, ranking GOP representative on the Appropriations Committee, said Democrats have not done everything possible to trim costs.

“We’re seeing an absolute strategy of putting ideological goals and special interests ahead of the best interests of the state,” she said.

As evidence, Lavielle noted the legislature has approved nearly a dozen new union contracts that award raises in the next two fiscal years, despite the deficit forecasts.

And while Democrats are touting recent enactment of a bill to gradually raise the minimum wage from $10.10 to $15 per hour, little thought was put into how this might drive up costs in the next budget.

Lavielle noted the package includes rate increases for nursing homes, some of which have unionized workers that are threatening to strike. Both nursing home management and union members have said the minimum wage increase could put more pressure on the industry to raise pay to retain workers.

Private, nonprofit social service agencies, which provide the majority of state-sponsored programs, have raised a similar concern. They asked for a special $100 million appropriation from the current surplus to retain staff and make other investments in their businesses.

That funding was not included in the budget.

But Democratic legislators said that despite the projected deficit, they and the governor did manage to bolster funding for several key priorities. 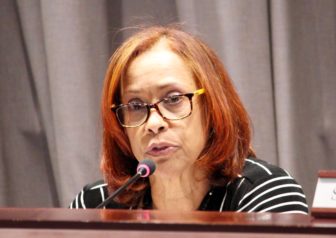 The budget increases Education Cost Sharing aid to cities and towns by $37.6 million in the first year of the new budget and by $78 million in the second.

Municipalities also were spared a controversial bill. Lamont wanted them to pay $73 million into the state over the next two years combined to help offset rising teacher pension costs.

The tentative budget deal also would modestly increase the state’s HUSKY A Medicaid program for working poor adults with children. Income eligibility limits would rise from 155 percent of the federal poverty level to 160 percent. This would allow about 4,000 more residents to receive health care.

Rep. Toni Walker, D-New Haven, longtime co-chairwoman of the Appropriations Committee, said this budget begins to reverse the damage done to education, health care, job training and social services as Connecticut struggled for years after the last recession with budget deficits and a slow recovery.